By Ian Johnson on 2010-01-12 - Ian has been a member of Driving Force since its inception. He began his career in journalism in 1962 on the Cheshire Observer and took over the paper's motoring column in 1966. Specialist areas include classic cars, product launches and automotive comment. 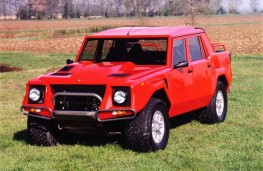 FOR the rich and famous of the 1980s who wanted the ultimate in 4x4 driving Lamborghini drove in with the LM 002.

Dubbed the 'Rambo Lambo', this startling vehicle featured massively wide wheels, a squat, militaristic stance and a 5,167cc V12 petrol engine that could hurl its massive 2700kg weight to 125mph and reach 60mph in 8.1 seconds.

As the above figures suggest, this was no ordinary 4x4 but a wild child that could cut the mustard with customers such as the King of Morocco, the Sultan of Brunei, and Rambo himself, Sylvester Stallone.

It started life as a design for a purely military vehicle, but its way-out capabilities opened up a new avenue for Lamborghini, a company primarily known for high-performance sports cars such as the 188mph Countach.

It was not Lamborghini's first attempt at a military vehicle because it built a prototype called the Cheetah in 1977 in the hope that the US forces may be interested.

This featured a rear-mounted Chrysler V8 engine but was destroyed during testing by US forces. Then Lamborghini rolled out the LM 001 which was similar to the Cheetah, but featured an AMC V8 power unit.

After testing it was found that the rear-mounted engine stacked-up some unfavourable handling vices in an off-road vehicle and so the LM 002 was born with a front engine. Weighing as much as a Mercedes 600 limousine, it was a fearsome beast.

These tyres were made exclusively for the LM 002 and were offered in two different tread designs, one for mixed use and the other for sand driving only. They could be run virtually flat without risk and could easily handle the desert heat plus the shattering load strains this extreme vehicle placed on them.

A gas guzzler of monumental proportions, the LM 002 was fitted with a 76 gallon fuel tank.

It its day the Rambo Lambo's performance in the desert was incomparable and it became a favourite among Saudi sheiks. For those who wanted even more power than the standard 440bhp a 7.2 litre V12, engine, usually used in powerboats could be fitted.

The military version featured mountings for machine guns and orders were received from the Saudi army. It is also rumoured that negotiation took place between Lamborghini and Libyan leader Col Gaddafi for a number of military versions.

The LM 002 took part in desert rallies to add to its already enviable reputation and near the end of its production run, an estate version was envisaged.

Estimations of its production numbers between 1986 and the early 1990s vary, but 246 is the total most quoted. Many exist and command healthy prices.

There are about half a dozen in the UK and recently one was offered for sale at just under £50,000.

But others have fallen by the wayside including that owned by Uday Hussein, son of the deposed Iraqi leader Saddam Hussein.

An American military unit which had commandeered it destroyed it in tests simulating the effects of a car bomb, having no idea of its value. What a military trophy that would have been if it had survived.