By Ian Johnson on 2010-01-16 - Ian has been a member of Driving Force since its inception. He began his career in journalism in 1962 on the Cheshire Observer and took over the paper's motoring column in 1966. Specialist areas include classic cars, product launches and automotive comment. 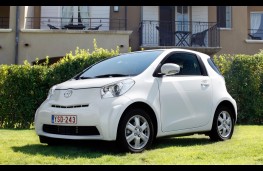 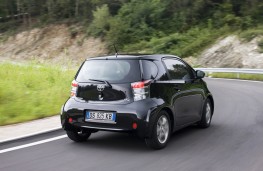 AT less than three metres long, the Toyota iQ is the world's smallest four seater.

But this statistic is just the start of the story of what is one of the the world's most advanced small car to date.

Riding on the success of the Aygo and Yaris ranges the iQ stretches the boundaries even further. But you have to drive the iQ to realise what it actually offers.

For a start this car - an IQ3 1.33 Dual VVT-i with Stop and Start system was capable of a sprightly 106mph and could achieve 0-62mph in a creditable 11.8 seconds thanks to the 97bhp available from its 1,329cc four-cylinder petrol engine.

This model at £11,615 is towards towards the top of the range as there are also 1.0 three-cylinder petrol engined versions also available from £9,615.

The engine in the 1.33 has been proved without doubt on other Toyota models and it endows the lightweight iQ with a zestful performance. The Stop and Start system used follows the usual pattern of stopping the engine when at traffic lights or in queues and starting it again by depressing the clutch.

As far as practicality is concerned the small rear seats of the iQ are easily accessible via wide-opening doors and are relatively comfortable. But legroom is only adequate. And luggage space is limited with rear seats in use, but this is what you expect in what is a dedicated city car.

But for one or two people, the iQ shines as a pleasant to drive and very well-built set of wheels with controls that are classics of efficiency combined with clever minimalisation.

The manufacturers say that much of the the iQ's appeal is all down to 'perfect imbalance' - asymmetry that is prevalent in Japanese aesthetics. Toyota says that an unexpected element in an otherwise perfect composition is often the thing that makes it more natural or dynamic. Giving vehicles a balanced appearance makes them easy to understand, but they can soon become boring.

Perfect Imbalance was applied to iQ's proportions: a simple, daring exterior with a strong contrast in the stable, robust stance created by the car's width and its short overall length. The risk in creating a car less than three metres long was that it would look weak and unstable, so Toyota designers knew iQ had to deliver a sense of strength and stability to break this perception.

It certainly attracts a second look from passers-by. One said it looked as if it was all front and no rear and another stated that it did away with a lot of the metal behind the driver, which on many cars was not necessary.

It is full of space saving innovation including a front-mounted differential and a flat underfloor fuel tank. 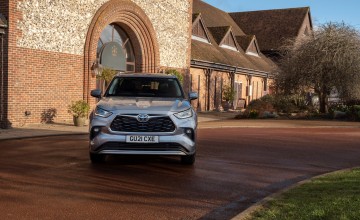