By Mike Torpey on 2012-02-01 - Driving Force news editor and responsible for organising our daily output. He was staff motoring editor of the Liverpool Echo for 20 years. 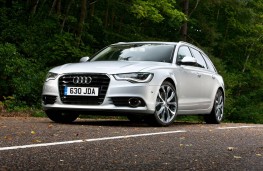 THE most potent V6 turbodiesel engine ever offered by Audi has been put into A6 saloon and Avant estate models along with the A7 Sportback.

The new 313PS 3.0-litre biturbo unit, which features an actuator in the exhaust system for a rorty sports car sound, will also be available in A6 allroad models later in the year.

Slotting in above the single-turbo 204PS and 245PS versions of the 3.0 TDI that already feature in the A6 and A7 Sportback ranges, the latest V6 has a two-stage turbocharger that helps the A6 3.0 BiTDI quattro saloon glide to 62mph in as little as 5.1 seconds.

And the sprint for A6 Avant and A7 Sportback is only fractionally slower at 5.3 seconds, while all have an electronically limited top speed of 155mph.

In common with existing TDI engines, the new BiTDI is backed up by technologies like start-stop and recuperation systems plus the thermal management set-up that quickly brings the coolant and oil to their operating temperatures.

Upshot is that Combined economy in A6 and A7 Sportback models is on an equal footing at 44.1mpg - impressive given the high outputs and low acceleration times involved.

Power is transmitted from the engine via an eight-speed tiptronic transmission to Audi's quattro all-wheel-drive system, and all BiTDI models will be available in SE and S line trim.