By Lee Gibson on 2012-02-04 - A journalist with nearly 30 years of experience on some of the biggest regional newspapers in England and Wales including the Birmingham Mail, Express & Star, Western Mail, the Sunday Mercury and Wales on Sunday. He currently edits the Sunday Mercury motoring pages as well as contributing to Eurekar. 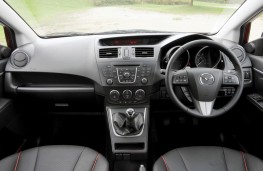 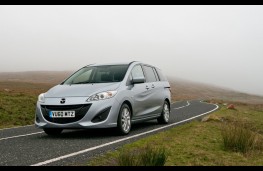 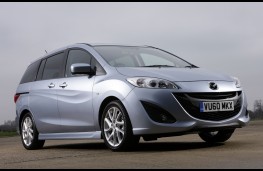 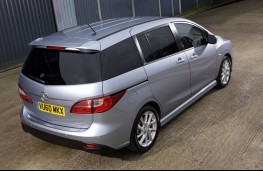 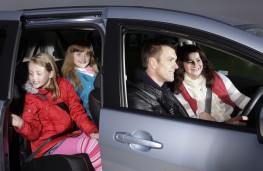 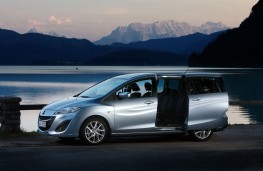 IF interior flexibility is the benchmark of a good compact MPV then the Mazda5 certainly gets top marks.

Some refreshingly original thinking seems to have gone into the various seat configurations which can be adopted, which certainly make this a family bus well-worth consideration.

It is pushing it to call this a seven-seater, though, because the centre seat in the middle row is really only big enough for a child.

Nevertheless, there is space and comfort aplenty should you only need to carry six and even the manufacturers have taken to describing the seating layout as ‘six plus one'.

Starting at the back, the rearmost seats fold flat into the boot floor, are quick and easy to flip up and offer head and leg room that is OK for adults.

In typical MPV fashion the boot is cavernous when the seats are down, but should they both be in use shrinks down to two or three shopping bags worth of space.

The sliding doors, which are electronically powered on this top of the range Sport Nav model, are a definite advantage though and make getting in and out of the back something which is not merely the preserve of the talented contortionist.

Move forward into the middle row and head and legroom is more than adequate for all but the Jolly Green Giant, and if you don't have an extra child to squeeze into that middle seat then the options for using the space are innovative.

The seat bottoms of the two outer seats, which also slide forwards and backwarads to help getting into the back, lift up to reveal hidden compartments.

When not needed the centre seat can be folded into one of these and a neat little storage unit folded out of the other. This houses a sizeable mesh pouch, into which the kids can toss all manner of stuff, as well as a pair of drinks holders.

There is still room above this to fold down the centre seat back for a more traditional armrest, or you can remove it and fold everything away to simply create some extra space between the seats. There are also flip down armrests on the outsides of the middle seats.

It is clever use of space and makes this an adaptable, practical and comfortable environment in which to travel.

Up front there's plenty of room with a well-laid out and easy-to-navigate dash and the driver and passenger also benefit from heated seats. The leather upholstery on the Sport model also adds a premium feel to the otherwise restrained interior.

This has all the bells and whistles including TomTom's unique IQ routes, speed camera warning system, advanced lane guidance and TomTom live services as well as incorporating stereo/CD player with iPod connectivity.

It adds nearly Â£500 to the price of the straight Sport model but it's an impressive bit of kit.

While practicality is obviously key in a people carrier, the Mazda5 is enjoyable to drive too.

It sits quite low for an MPV, meaning that it feels stable on the road and body roll is not a problem, while handling is sharp and some perky performace from the 1.6 litre diesel means it is impressively nimble too.

This engine, coupled with a slick six-speed manual gearbox, offers plenty of pull through the rev range as well as pretty good efficiency, with potential for 54.3 miles per gallon and CO2 emissions of 138g/km meaning running costs should be reasonable.

Safety, of course, is paramount with an MPV, and the Mazda5 has front, side and curtain airbags as well as stability and traction control.

With Mazda's enviable reliabiltiy record and some good residual values added into the mix, this Japanese option will continue to be a thorn in the side of Ford and the major European manufacturers which tend to dominate this marketplace.

CAR makers are past masters at making us want to spend just a little bit more...

IN a packed field of competitors, to stand out from the crowd takes a bit of...