By Mike Torpey on 2012-03-05 - Driving Force news editor and responsible for organising our daily output. He was staff motoring editor of the Liverpool Echo for 20 years. 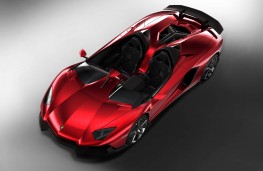 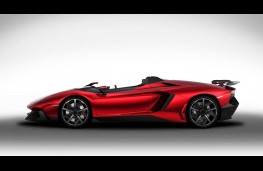 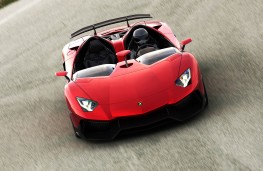 THE iconic marque has come a long way since its early days of building tractors from leftover wartime hardware.

And this week at the Geneva Motor Show, Lamborghini will unveil what it says is the most uncompromising open sports car of its entire history.

Described as a force of nature on the wheels the one-off Aventador J is a 6.5-litre V12 two-seater producing a mighty 700bhp.

suspension for F1-style performance and handling.

In fact viewed from the side, the front end of the Aventador J actually looks like a Grand Prix car.

The designers in Sant'Agata Bolognese have not only dispensed entirely with the roof, but also with the front windscreen.

The front of the Aventador J is narrower than the current Aventador, its front dominated by a carbon fibre air scoop with upward tilting winglets.

Its doors open upwards, there are black carbon fibre highlights to contrast with the red body colour and the five-spoke aluminium wheels have 20-inch rims at the front and 21-inch at the rear.

Though it is fully functional for road use, the 200mph plus ‘J' is seen as a one-of-a-kind piece of art and at the end of the Geneva show will go to one fortunate owner - there will be no prototypes and no others for the Lamborghini museum.

That said, Lamborghini is promising its fans that the Aventador success story has only just begun.