By Ian Johnson on 2012-06-10 - Ian has been a member of Driving Force since its inception. He began his career in journalism in 1962 on the Cheshire Observer and took over the paper's motoring column in 1966. Specialist areas include classic cars, product launches and automotive comment. 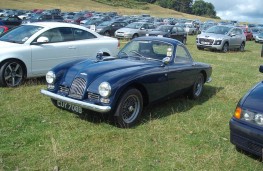 SOMETIMES it pays to adhere to what you do best, some sound advice Morgan should have heeded when the Malvern company threw the wraps off its Plus 4 Plus in 1963.

This was the one time in the company's history when it tried to update its traditional bodywork to provide a closed-in coupe style.

Up to that time Morgan had been riding high on its hairy open roadsters with their traditional British looks and performance.

Because its had stuck to its guns the company, quite unfairly, had been subjected to criticism that it was not moving with the times by producing a modern flowing design.

Morgan was viewed as the last bastion of the British country gent sports motorist and it was a target for the growing modernism movement so the Malvern-based car maker responded with the Plus 4 Plus.

It featured glass fibre bodywork on the standard Plus 4 frame with traditionalism hanging on in there with some ash wood framing.

There were wind down windows, a first for Morgan, and from the front it did not look that bad. The problem was the coupe bodywork looked almost dome-like and did the car no favours at all.

I always thought this car would have been much better in GT styling seen to best effect on a car of this size in the later Triumph GT6.

Under the bonnet was a four-cylinder Triumph TR4A engine of 2,138cc which pushed out over 100bhp and gave the car 110mph capability. Transmission was four-speed speed with synchromesh on 2nd, 3rd and 4th gears.

Suspension was shared with the Plus 4 imparting superb cornering with no perceptible body lean.

Performance was better than Plus 4, because the glass body kept the weight low in spite of more interior space, and the more modern shape had less air drag.

However, sound insulation was limited and it featured the same very hard ride, limited suspension travel, and jackhammer back axle as other Morgans.

It is said that that experienced Morgan owners can run over a coin in the road and tell which way up it is.

But the Plus 4 Plus was not only strange on the eye, it was just too OTT to engage the interest of Morgan traditionalists and was a flop.

Only 26 were built before Morgan modernism of the day was confined to the file marked 'I told you so'.