By Mike Torpey on 2013-09-09 - Driving Force news editor and responsible for organising our daily output. He was staff motoring editor of the Liverpool Echo for 20 years. 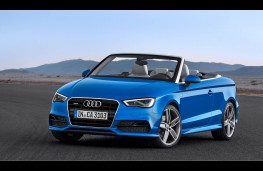 AUDI'S all-new A3 Cabriolet model will be longer and more spacious than before when it hits the streets next spring.

And it will have an automatic fabric roof that opens and closes hydraulically in less than 18 seconds and is fully concealed from view when retracted.

The model makes its world public debut at this week's Frankfurt Motor Show where Audi will announce that the first ever models equipped with quattro all-wheel drive as well as a fiery S3 Cabriolet will follow at a later date.

Though fractionally lower than its predecessor, the newcomer is both longer and wider than before and boasts a larger boot too.

The front of the A3 Cabriolet features a single frame radiator grille flanked by flat headlights using either halogen or xenon bulbs depending on version, or optional LED lamps, while an aluminum-look strip runs around the roof.

Pressing a button opens or closes the top at speeds of up to 31mph and, folded into three layers, rests in a tray that barely affects the 287-litre luggage capacity.

The soft top has a glass rear window, comes in black, grey or brown and has a thicker inner foam layer which reduces the interior noise level of the A3 Cabrio.

Inside, the steering wheel and seats are new designs while the new electro-mechanical parking brake is operated by a button on the centre console.

Depending on which of the three trim levels - SE, Sport and S line - customers go for, the seats are finished in either cloth or a combination of cloth and leather, with full leather and an Alcantara/leather mix on the options list.

Cabin space is sufficient for four adults and the backs of the two rear seats can be folded down to create a load-through area.

Audi says all will bring a fuel economy improvement of around 12 per cent compared with their closest equivalents in the previous A3 Cabriolet range, despite also offering better performance.

The first ever S3 Cabriolet, which follows shortly after the initial launch, will sit 25mm lower than the standard car on S specific sports suspension and has a 2.0-litre TFSI petrol engine producing 300PS.

Equipped as standard with six-speed S tronic transmission, it will be capable of 0-62mph in 5.4 seconds with the potential for fuel economy of 39.8mpg.