By Stewart Smith on 2013-10-13 - Stewart was the former motoring editor of the Coventry Telegraph and is now a freelance contributor to Eurekar. He is based in Scotland and specialises in First Drive reviews. 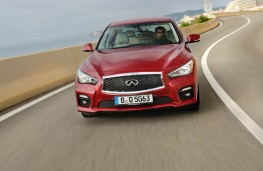 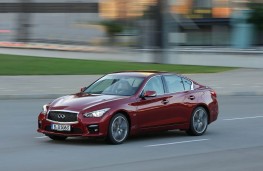 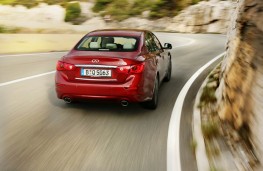 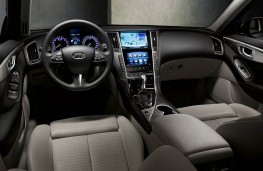 FANS of Formula One will be well aware of the name Infiniti which is plastered all over world champion Sebastian Vettel's super-fast race car.

But how often do you see the badge on a car in the UK? Just 520 of the Nissan premium brand motors were sold here in the past year.

Infiniti is hoping that in the next 12 months this will rise to at least 1,500 with the introduction of its latest model the Q50, which will be up against the likes of the BMW 3 Series and Audi A4.

At launch it comes with two engines, a 2.2-litre 168bhp 4-cylinder turbo diesel from Mercedes-Benz and a homegrown 3.5-litre 359bhp V6 petrol-electric hybrid.

Most buyers will probably go for the diesel which has more than adequate power and will return a claimed 58mpg on a combined run.

The oil-burner comes as a six-speed manual or seven-speed automatic and has a top speed of 143mph and a 0-62mph time of 8.5 seconds.

But if it's really stunning power you're looking for the hybrid will fit the bill. Boosted by the electric motor, which gives it an extra 67bhp, Infiniti claims it has a top speed of 155mph and a sprint time of just 5.1sec 0-62mph.

Infiniti is also upbeat about the technical advances for the Q50. It has fitted what it claims is the world's first drive-by-wire steering system for a mainstream car. It's an optional extra, costing £800, on the SE and Premium grades but standard on the Sport model.

There is no direct connection between the steering wheel and the road wheels. Everything is controlled electronically. But if it fails there is a mechanical fall-back system that kicks in.

Another option is Active Lane Control which uses a camera to detect the lane the car is in and if the driver drifts too near the next lane the steering automatically makes a correction keeping you on course.

With the longest wheelbase in the class at 2850mm, the Q50 has plenty of room for adult passengers front and back; rear knee room is among the best in class.

The interior is pleasant with a lack of clutter up front. All the switches and dials are easy reach and read and it has a built-in 8-in screen which controls all the usual sat-nav and infotainment gear.

Beneath this is another seven-inch screen which displays controls for the cars ancillary systems, such as climate control and music along with apps loaded from you smartphone.

The diesel will be the big seller in the UK, probably taking around 85 per cent of sales.

I found it very eager to get off the mark with pretty good acceleration and in automatic form the gear changes are smooth.

It does make a bit of noise when you put the foot down at low speed but once up to speed it becomes reasonably quiet. Road, wind and engine noise on the motorway is well suppressed and the overall experience in the well-appointed cabin is excellent.

The Q50 handles pretty well, although it felt as if it was a much bigger and heavier motor than it is.

But owners will have several choices when it comes to steering and suspension settings which can be adjusted to suit their driving preference.

The new Infiniti Q50 comes in SE, Premium and Sport specifications with prices starting at £27,950 for the SE diesel, up to £32,750 for the Sport diesel. The Hybrid comes in one specification, Sport, and costs from £40,000.

This new Infiniti won't make BMW or Audi tremble but it has enough merit to attract buyers looking for something outside the mainstream.