By Mike Torpey on 2013-12-06 - Driving Force news editor and responsible for organising our daily output. He was staff motoring editor of the Liverpool Echo for 20 years. 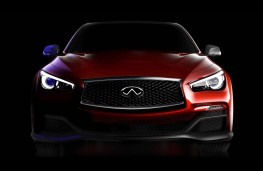 INFINITI will unveil a Formula One-inspired concept car based on the Q50 premium sports saloon at next month's North American International Auto Show in Detroit.

The Q50 Eau Rouge concept is named after the world-famous corner at the Grand Prix track in Spa-Francorchamps, one which has seen some of the most memorable driving feats in F1 history.

The model represents Infiniti's design vision of a high performance variant of Q50, and blends road car and motorsport technology.

Infiniti's design chief Alfonso Albaisa said: "Performance is a key pillar of Infiniti's DNA and this car expresses a deepened design interpretation of that.

"The Q50, with an abundance of technologies, provides a great basis for an extreme performance version, embodied in the design of Q50 Eau Rouge."

The brand, the luxury arm of Nissan, was launched in 1989, builds its cars in Japan and the US and sells in 50 countries.

As the title partner and vehicle performance partner of Red Bull Racing, Infiniti has a technical collaboration with the F1 team and its four-time world champion driver Sebastian Vettel serves as Infiniti's director of performance.