BMW bumps up the M

By Mike Torpey on 2013-12-12 - Driving Force news editor and responsible for organising our daily output. He was staff motoring editor of the Liverpool Echo for 20 years. 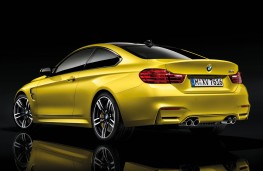 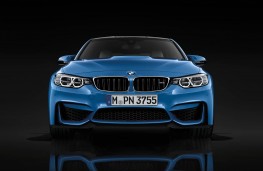 BMW has lifted the wraps from the new M3 Saloon and M4 Coupe models ahead of their joint debut at next month's Detroit Motor Show.

Now into a fifth generation, the stablemates - due next summer - may sport different badges but are near identical under the skin.

Another first is the adoption of a turbocharged engine - a high-revving, 3.0-litre six cylinder unit with M TwinPower Turbo technology and producing 431bhp - to replace the current M3's V8.

Not only does it exceed the rev range figure recorded by the outgoing M3 by roughly 40 per cent, it also manages a reduction in fuel consumption and emissions of around 25 per cent.

Official figures see both cars capable of hitting 62mph in 4.3 seconds - with a Governed 155mph top speed - and returning and average 32.1mpg.

Both the M3 and M4 are rear-wheel drive and a six-speed manual gearbox is standard, with the option of a seven-speed dual clutch transmission.

In order to maximise dynamics, a weight reduction of more than 80kg has been achieved thanks to lightweight materials, both models now featuring a carbon-fibre reinforced plastic roof.

Design-wise, the saloon and coupe boast an aggressive face and front apron, with its trio of large intakes, powerdome on the bonnet and twin stalk side mirrors.

And the new M side gills perform both a stylistic and a functional role as integrated into them are Air Breathers, which team up with the Aero Curtains in the front apron to help optimise the airflow around the wheel arches and so improve aerodynamics.

Greater differences in the two models though can be seen at the rear where the saloon is fitted with a lip spoiler to reduce lift, while the tailgate of the coupe has an integrated rear spoiler and is made from a carbon-fibre compound.

Inside there are bespoke M cabin details while the bespoke front seats take inspiration from the bucket seats fitted in racing cars.