By Mike Torpey on 2014-07-22 - Driving Force news editor and responsible for organising our daily output. He was staff motoring editor of the Liverpool Echo for 20 years. 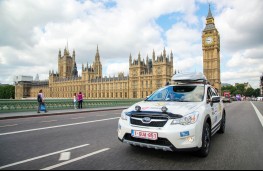 A SUBARU XV compact crossover is facing its toughest challenge yet in a 21,700-mile on and off-road journey from London to Ulaanbaatar, Mongolia, and back.

Two Canadian adventurers who make up the Offtrax team - Corinne Copreni and Jess Watt - have entered the Mongolia Charity Rally, a pan-continental road trip from the UK to Mongolia.

Subaru Europe has provided Offtrax with a Subaru XV 1.6i for the journey, which has just started from London and will last up to three months.

Copreni said: "Some might think it's just plain crazy to drive almost 22,000 miles to Mongolia and back, across some of the most unforgiving terrain in the world, all for charity.

"Well, it might just be - but if it makes you dream, then it's not crazy at all. After going for a test drive we were 100 per cent sold on the idea that if there's one car that could make it through this rally it's the Subaru XV."

The only modifications made to the car are a bonnet protector and a sump guard, essential equipment for taking on the harshest terrain.

Otherwise, the XV is entirely standard and remains on the same original equipment all-weather tyres as other XVs.

Subaru UK chief Paul Tunnicliffe added: "Every new Subaru model undergoes months of testing to ensure it's as capable as possible, in all conditions, before it goes on sale. This may be the XV's toughest test to date."