By Ian Johnson on 2014-12-20 - Ian has been a member of Driving Force since its inception. He began his career in journalism in 1962 on the Cheshire Observer and took over the paper's motoring column in 1966. Specialist areas include classic cars, product launches and automotive comment. 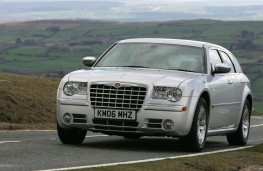 I AM often asked which modern cars would qualify for classic status in years to come.

One I can recommend without hesitation is the Touring or estate version of the iconic Chrysler 300 equipped with the V8 petrol hemi-engine which weighs in at 5,645cc.

It is this enormous vehicle, known as the 300C Touring, with its chip slicer grille that played a part in endearing American ideas to the UK large estate and management motoring sectors. There were other engine options but the V8 was treated with almost reverence.

First shown at the 2003 New York Motor Show, it was designed by Ralph Gilles.

It was based on the rear-wheel-drive Chrysler LX platform which features components derived from the Mercedes-Benz E-Class of 2003.

There were other engines in the 300 range but it is the C model with its magnificent V8 that is the jewel in the crown. With 155mph in its sights and a 0-62mph sprint of 6.4 seconds, this was so much more than just another transatlantic-inspired cruiser.

In some ways it reminded me of the now very rare Vauxhall Cresta-based Friary Estate of the 1950s, although this was a much lesser vehicle in terms of sheer power.

The top-of-the-line hemi-engined version used a multidisplacement system and can run on four cylinders when less power is required. This also helped with fuel consumption which averaged out at 22mpg.

If you wanted more power there was 165mph, 425bhp, 6.1-litre V8 SRT model, which could hit 60mph in 4.9 seconds, but even for an avid V8 fan like myself this may have been a little over the top in an estate.

All 300C Touring models, along with European 300C sedans and right-hand drive models were assembled by Magna-Steyr in Austria June 2005.

A redesigned 300 was introduced in 2011. Gone was the chip-slicer front and in came something a little more refined. But the bombshell was that the estate had been dropped and only the sedan was available, and this is why the 300C Touring with its capacious and good looking rear plus supreme power is now a very desirable vehicle.