By Mike Torpey on 2015-02-25 - Driving Force news editor and responsible for organising our daily output. He was staff motoring editor of the Liverpool Echo for 20 years. 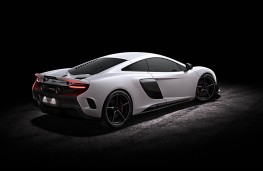 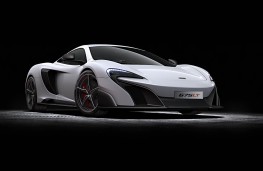 IF you've got a spare quarter million and fancy something seriously hardcore then take a peek at the new McLaren 675LT.

Lithe, low and utterly spellbinding, the supercar namechecks the brand's ‘Longtail' heritage and is seen as a rival to the Ferrari 458 Speciale.

Offered as a coupe only, the 675LT will be the most track-focused, yet road legal, model in the McLaren Super Series, with a power to weight ratio that eclipses established rivals.

The Woking-based brand has upped the power of the 3.8-litre twin turbo V8 engine from the 641bhp of the 650S model to a massive 666bhp.

First images of the car, which will debut at the Geneva Motor Show next week, show a more aggressive look than McLaren has previously displayed.

The active ‘Longtail' Airbrake is 50 per cent bigger than the one fitted to the 650S yet, due its carbon fibre structure, is actually lighter.

More than half the parts have been changed in the V8 engine to deliver more power and torque, the upgrades including more efficient turbos, cylinder heads, exhaust manifolds and a faster-flowing fuel pump and delivery system.

Inside, there's a pair of lightweight carbon fibre-shelled bucket seats upholstered in Alcantara as standard and modelled on those in the McLaren P1.

A subtle 675LT logo features on the headrest of each seat, and is also present on the rev counter, while in a change to the other models in the Super Series, the air-con controls are now incorporated within the touchscreen infotainment system.