M for magic with BMW

By Mike Torpey on 2015-10-15 - Driving Force news editor and responsible for organising our daily output. He was staff motoring editor of the Liverpool Echo for 20 years. 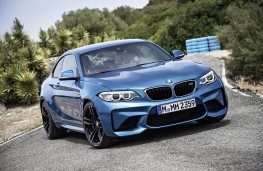 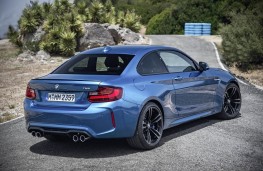 M's the word from German giant BMW as its latest super coupe, the M2, prepares to hit the streets.

The new compact sports coupe follows a long line of road and racing Beemers and will cost £44,070 when it arrives next April.

Combined with the optional seven-speed M DCT gearbox, the 2-Series Coupe can scorch from 0-62mph in a fleeting 4.3 seconds.

Nonetheless, go for the six-speed manual gearbox and official combined fuel consumption is 33.2mpg, and 35.8mpg with the optional auto. CO2 emissions are 199g/km and 185g/km.

BMW says its engineers have worked tirelessly to reduce weight, improve rigidity and hone the M2's responses to help deliver a rewarding drive.

With its four tailpipes, the M2 is easily recognised as a BMW M model, not least thanks to its exhaust soundtrack courtesy of an electrically controlled flap.

The car comes as standard with a six-speed manual transmission featuring a speed control function that blips the throttle on downshifts and lowers the engine's revs on upshifts.

An option is the latest generation of the seven-speed M DCT, operated as a full automatic or manually using the gearshift lever or steering wheel shift paddles.

Inside, the sports seats are in black Dakota leather with blue contrast stitching and an M logo in the backrests while there's an M footrest and kneepad on the centre console for the driver.

Instruments with M2 dials and needles, a speedo to 186mph and a rev counter reading up to 8,000rpm point to the car's performance.

An interior Comfort Package is standard, along with kit like a Navigation Professional system, Professional Media Package and xenon headlights.

And of course there's the BMW options list too, though the choice of four exterior paint finishes - Long Beach Blue metallic, Alpine White, Black Sapphire and Mineral Grey - is included in the price.