By Enda Mullen on 2016-10-23 - Enda is a business reporter for the Coventry Telegraph and is also the motoring editor for the Solihull News. He covers the Midlands automotive industry and in particular Jaguar Land Rover and Aston Martin product launches. He is a renowned automotive commentator. 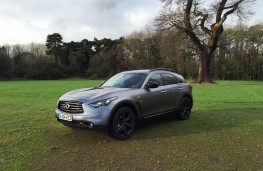 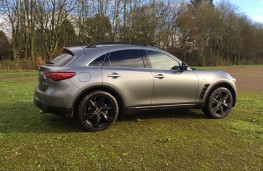 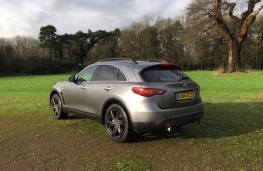 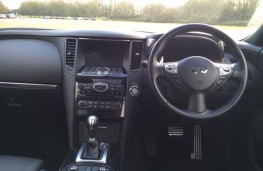 INFINITI'S QX70 is without doubt a car that really puts the ‘sport' into the SUV acronym.

With a profile that's sleek, stylish, muscular and imposing it comes across as the perfect halfway house between a conventional SUV and a coupe.

Its styling is something I rather like and even though it's been around for a while now it remains a vehicle that's still refreshingly different to anything else out there.

It's the car formerly known as the FX but as a rebranding exercise some time back saw it bestowed with a new monicker.

Launched in 1989 Nissan's upmarket offshoot Infiniti only came to the UK in 2009.

It has struggled to win favour to some degree - not helped by the fact we've endured a global recession since then - but the brand seems to have established itself to some degree and sales have certainly soared more recently.

If you're after an SUV in the traditional sense then it's probably best to discount the QX70.

It might follow a general SUV design blueprint but this is a vehicle that's very much designed to perform on-road rather than off it, though it does come with four-wheel drive.

While it can cope admirably with a bit of moderate off-roading think of its four-wheel drive capability as something that enhances its handling on-road rather than being able to get you out of muddy holes or up steep grass inclines.

While the QX has a big footprint it offers a traditional five-seat arrangement rather than the extra pop-up row that many large SUVs offer.

On the inside the cabin is big, open and plush and designed to carry five people in a considerable degree of comfort.

Many elements reinforce the premium character of the car, from first-class fit and finish and exemplary build quality, to sophisticated and classy switchgear and instrumentation.

All this ensures the Infiniti is more than capable of giving its premium rivals a run for their money.

One of the things I like about the QX70 is its moderately elevated height is absolutely spot-on.

It's noticeably higher than a regular saloon or estate car but not so high that you have to step up to it, as is the case with the Range Rover Sport.

This and an excellent suspension system enhance its handling immeasurably. SUVs can struggle to deliver decent driving dynamics but the QX70 is more than up to the task and is a genuinely fun car to throw around bends at speed.

While the driving experience might be maximised in the range-topping 5.0-litre petrol V8, for real world everyday motoring in the UK that probably makes little sense.

The 3.0-litre diesel's overall blend of performance and economy works well and it still packs enough of a punch to be a decent driver's car.

This is an area where Infiniti really trump rivals like Audi, BMW and Mercedes - offering an all-in package that's hard to beat.