bull back to roots

By Ian Johnson on 2016-12-29 - Ian has been a member of Driving Force since its inception. He began his career in journalism in 1962 on the Cheshire Observer and took over the paper's motoring column in 1966. Specialist areas include classic cars, product launches and automotive comment. 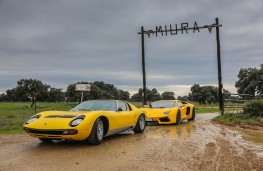 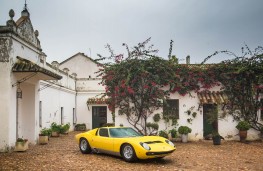 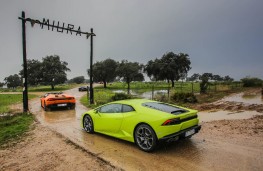 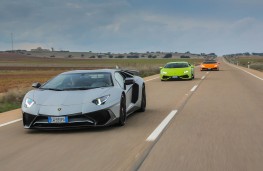 THAT raging bull of a classic supercar, the Lamborghini Miura has rounded off events celebrating its 50th anniversary with a journey back to its roots.

A Miura SV example sporting its famous bull badge, from the Museum at Sant'Agata Bolognese and six brightly-coloured Lamborghini Huracans and Aventadors travelled over 400 miles from Madrid to Lora del Rio, in Andalusia, Spain.

Their destination was the famous bull breeding farm run by the Miura family, one of the oldest and most highly reputed "ganaderÃ­as" in Spain, founded 175 years ago.

Today, the farm is run by Eduardo and Antonio Miura, the sons of Don Eduardo who met Ferruccio Lamborghini in 1966, the year when the world was introduced to what would soon be considered an icon in the history of sports cars.

It was a fitting conclusion to the important anniversary celebrations: events scheduled throughout the year included top international Concours d'Elegance such as Amelia Island, Villa d'Este and Goodwood and an Italian tour held in June with 20 Miuras coming from all over the world to take part.

The Miura was produced by the Italian automaker between 1966 and 1973 and was a pioneer ofe the mid-engined two-seat layout.

When released, it was the fastest production road car made with a top speed of 171mph.

The Miura was originally conceived by Lamborghini's engineering team, which designed the car in its spare time against the wishes of company founder Ferrucchio who preferred powerful grand tourers over out and out sports cars.