IT'S futuristic looks and stunning performance makes it an immediate head turner which is why the BMW i8 has been labelled by many motoring experts as the best supercar of all time.

It's without doubt too the best ever model to emerge from the BMW stable in Munich and even though some people might flinch at its Â£104,000 asking price there's no getting away from the fact that the i8 with all its high tech gismos on board and sleek, low-slung styling the i8 is an outstanding piece of machinery.

In its day BMW has produced some outstanding sports car models, such as the M1 and Z8, but really nothing at all like the i8 which is in a class of its own and is unique in today's market.

What makes the i8 so different is not just its stunning looks, but the way it svelte-like super road-going performance is produced by some quality engineering from the Bavarian backroom team.

Outstanding performance comes from a petrol-electric hybrid engine that entails a 228bhp three-cylinder 1.5-litre turbo petrol engine sitting behind the driver linked to 139bhp electric motor at the front.

Combined they produce an exhilarating acceleration hit of 0 to 62mph in 4.4 seconds with a remarkable 570Nm of torque.

This is all delivered with four-wheel-drive traction through a standard six-speed automatic transmission and done so quietly and with smooth up and down gear change the driver hardly notices - it's that seamless.

For the real sports car driving enthusiast push the gearlever over to the left and into sport mode so that the petrol engine runs all the time, along with firmer damper settings coming into play, and that's when the real performance driving begins.

For those though who prefer to stay in the more relaxed comfort or Eco mode, probably for tottering around town, then basically the car is on electric power motoring with the petrol engine soon coming into play when the driver hoofs down the accelerator pedal.

Either way it's all extremely civilised and even when pushed hard out on the open road the engine is really quiet inside, so much so that BMW engineers have engine noise piped into the cabin through the speakers. Talk about think of everything.

The i8 is also an exceptionally easy car to drive even when motoring round tight country bends where it's effortless thanks to crisp, responsive light but positive steering and while BMW claims its petrol-electric hybrid engine will return 134.5mpg, that has to be taken with a pinch of salt.

It depends on how and where you drive the car but the best I returned was just on 66mpg and that after a couple of steady but quite long motorway stints.

In reality it's all about managing the battery charging if a driver is aiming for that remarkable official mpg figure and both the petrol engine and the regenerating braking system will help recharge the electrical system.

The driver though will need to top-up the battery charging by regular plug-ins to a mains supply. At home it can be plugged into the household electric system where it took me nine hours to fully charge up a flat battery.

Some BMW dealers are now offering recharging at their premises with drivers using a special recharge card - a bit like a credit card system.

Out and about in the i8 the owner has to be careful where they park since the car's innovative butterfly wing doors open upwards and it can be quite difficult to use them in some of our more congested car parks.

Getting in and out is tricky too as the seats are quite low and a squeeze for anyone above average proportions.

Once inside there's plenty of head and leg room for both driver and front seat passenger while the two small rear seats are really for two young children and not for adults - there is no practical head or leg room in the back.

There's little boot space either - about 154 litres - which is enough for a weekend away but not golf clubs.

The cabin itself is a master class of quality, luxury and high tech - totally different to anything seen in a supercar before.

There's a wraparound dashboard that features two 8.8-inch HD screens - one in front of the driver with the necessaries like rev counter, speedometer and the like, and a more centrally mounted screen that has the sat nav and infotainment services easy to hand.

Overall the interior matches the rest of this car being top class and futuristic with an exceptional high standard of kit that includes the likes of LED lights, ESP, traction control and more.

Driving the i8 brought back memories for me when testing way back in the mid-1980s the first De Lorean DM12 supercar with its gullwing opening doors, Renault/Peugeot V6 powered engine and fibreglass body structure.

The De Lorean was innovative in its day but sadly the American-owned Northern Ireland-based company ran out of money in 1983 with only around 8,500 cars built.

But the De Lorean was a trendsetter - not to mention a movie star in Back to the Future - and that's what the i8 is today.

The BMW may be a totally different piece of machinery but it goes to show how far automotive technology has moved on.

The i8 is both thrilling and compelling with a fantastically engineered power train and excellent driving dynamics and unlike that old rogue of a De Lorean this BMW has an exquisite air of quality and luxury both inside and underneath. 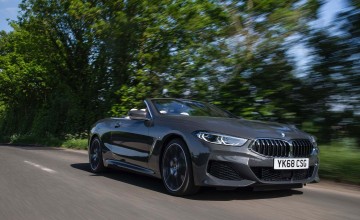 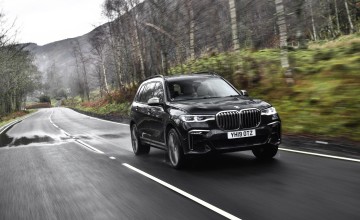 New X7 is BMW's biggest yet

BMW has sealed its X Drive line up with a huge kiss - the X7. This is the big...