By Stewart Smith on 2017-01-16 - Stewart was the former motoring editor of the Coventry Telegraph and is now a freelance contributor to Eurekar. He is based in Scotland and specialises in First Drive reviews. 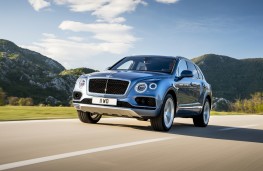 LUXURY car maker Bentley has reported record sales for last year with more than 11,000 models sold worldwide with impressive growth in Europe and the UK.

It was Crewe-based Bentley's fourth consecutive year of sales of more than 10,000 cars representing a nine per cent growth on the performance of 2015.

Strong customer demand for the Bentley Bentayga, which reached all global markets during 2016, played a key role in this success.

The USA remained Bentley's number one customer sales region closing the year with 2,792 sales, marginally less than 2015 when the company sold 2,864 cars in the States. Even so, the figure accounted for 25 per cent of global deliveries.

InEurope, sales were up by a massive 56 per cent with2,676cars delivered compared with the previous year's figure of 1,695 while Bentley's home market in theUK continued to perform strongly, establishing itself as the third highest selling region, with 1,692cars delivered, up from 1,457 in 2015.

"The strong performance of recent years has continued through 2016, a year of new models, investment and record demand.

"We have introduced the world's first luxury SUV, the Bentayga, opened the first building of our R&D expansion and outlined our ambitions for potential future investment at our factory in Crewe, UK.

A VERSION of Bentley's Bentayga has recently been officially declared the...