By Ian Johnson on 2017-01-26 - Ian has been a member of Driving Force since its inception. He began his career in journalism in 1962 on the Cheshire Observer and took over the paper's motoring column in 1966. Specialist areas include classic cars, product launches and automotive comment. 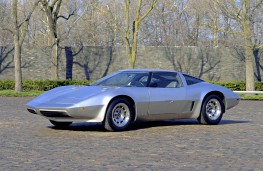 THERE has been much talk of a mid-engined Chevrolet Corvette in recent times, but back in the 1970s General Motors built a concept on this theme which had the ‘Vette fans champing at the bit for a production version.

The car was dubbed the Aerovette and featured a transverse mid-mounted V-8 engine in a stunning aerodynamic body.

But Ford played an ace card in the American market and decided to sell the DeTomaso Pantera through Lincoln-Mercury dealers.

To counter this, DeLorean decided to test the water and ordered one XP-882 cleaned up for display at the 1970 New York Auto Show.

In 1972, DeLorean, famed for the crash of the DeLorean sports car company,authorized further work and the result was the Reynolds Aluminum Car powered by two Chevrolet Vega double rotor engines. This gave a staggering power output of 420hp.

But the energy crisis bit hard and the writing was on the wall for thirsty multiple rotor engines.

But the definitive Aerovette appeared In 1976, with a 6,600cc Chevvy V8 and was approved for production in 1980 with a slightly lower powered engine.

But time was against the car because its main supporters Duntov, Bill Mitchell, and Ed Cole had retired from General Motors and the car ended up in the history book.

The sole existing Aerovette concept can be found on display at the GM Heritage Collection, along with a sibling concept, the Reynolds Corvette.

The Aerovette was so good looking that it became known as "the car that launched a thousand magazine covers."

And that is no over-estimation because the Aerovette is, in my view one of the best-looking designs ever.

Its side profile was almost almond shaped and the enormous windshield halves met at a centre ridge.

Aerodynamically sleek, it featured gull-wing doors and a drag coefficient of 0.325. No extraneous lines, surfaces, or graphics marred the design.