By Ian Johnson on 2017-02-23 - Ian has been a member of Driving Force since its inception. He began his career in journalism in 1962 on the Cheshire Observer and took over the paper's motoring column in 1966. Specialist areas include classic cars, product launches and automotive comment. 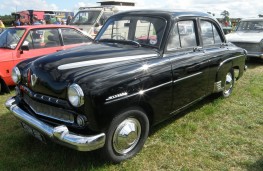 THE Wyvern is a mythical beast but in the 1950s it meant just one thing to the average Brit - a flashy Vauxhall.

The country was shaking off the shackles of post war austerity and was ready for something new in terms of style and performance.

So, in came the Vauxhall Wyvern, an American juke-box styled saloon which featured what could be termed the Wow! Factor of its day.

The Wyvern was not a new name for Vauxhall, but the E version of 1951 heralded a new era of popularity for the company.

It was big, bold and because of a roomy front bench seat couldaccommodate six with ease.

The Wyvern was aimed at the customer who wanted a roomy car without going the whole hog and buying a six-cylinder model.

As such it was powered by a 1,142cc and later 1,508cc four-cylinder engine, the latter being the better option in terms of performance.

The thoroughly modern monocoque body, bold chrome bonnet flutes and acres of brightwork was the order of the day for this General Motors company, as was the curved windscreen which was something of a sensation in Middle England.

The Wyvern was a competitor to the successes of the Ford Consul and sold well in Britain Vauxhall abandoned the six-seater four-cylinder market and replaced it with the smaller but more radically styled Victor in 1957.

A total of 105,275 were made, but rust was a major problem with the red ruin bubbling the paintwork of cars which were relatively young.

THERE'S a word some car makers are too keen to apply to almost every new model...

VAUXHALL'S Zafira Tourer has been around now since 2012, but it has been given...

THE motoring world might have declared diesel the work of the devil but...