By Ian Johnson on 2017-03-23 - Ian has been a member of Driving Force since its inception. He began his career in journalism in 1962 on the Cheshire Observer and took over the paper's motoring column in 1966. Specialist areas include classic cars, product launches and automotive comment. 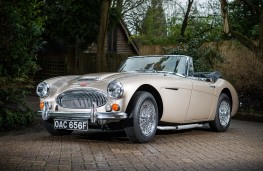 AUSTIN Healey fans will be flocking to a car auction next month to witness the next step in the future of one of the marque's most significant cars.

A 1967 Austin Healey 3000 MK III, the very last series production car that rolled off the line at the Abingdon factory, will be auctioned as part of CCA's two-day mega sale at the Practical Classics Classic Car and Restoration Show on Sunday, April 2.

Chassis Number HBJ843025 was produced on December 21,1967 and first registered to the Donald Healey Motor Company in Warwick with the registration number OAC 656F.

It went through two more registered keepers in the Leicester area before the current vendor purchased the car in 1972, cherishing it for the last 45 years.

This BJ8 is an original, right-hand drive manual car that has covered 56,000 miles in 50 years. The car benefitted from a fresh restoration a year ago and was subject to a bare metal respray in Golden Beige Metallic.

Speaking ahead of the auction, classic car specialist at CCA Richard Greenhalgh, said: "This has got to be the most significant, road going Big Healey on the market today and as such represents an amazing opportunity for classic car collectors. The car has great shut-lines, a deep shine and lots of detail.

"This is the first time the car has been offered for sale in over 40 years and as such an important and iconic British sports car we expect a significant amount of interest,"

The car comes complete with a large history file, documentation and a Heritage Certificate confirming its status as the final Big Healey ever built.