By Ian Johnson on 2017-04-20 - Ian has been a member of Driving Force since its inception. He began his career in journalism in 1962 on the Cheshire Observer and took over the paper's motoring column in 1966. Specialist areas include classic cars, product launches and automotive comment. 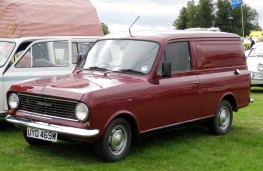 THE car-derived van has produced some amazing successes for vehicle manufacturers and one of the light commercial stars of the 1960s and 70s was the Bedford HA van.

Introduced in 1963, it was based on the Vauxhall Viva HA family carand was an instant success with light delivery firms, builders and many private drivers.

It became an icon of its day and was the inspiration for Postman Pat's original van.

It was originally available in 6cwt and heavier duty 8cwt models.

The 8cwt had a heavier rear axle, bigger tyres, and a sixth leaf in the rear springs.

By 1971 the 6cwt had been downgraded further yet and now only came with a driver's seat as standard. A fold-down rear seat was available as an option.

The van was subjected to a number of improvements in its career and the market recognised its potential for versatile conversions.

One of the best was the Beagle estate, which looked very smart considering it was based on a van. And there was also the Roma campervan conversion which although compact and bijou served its purpose very well.

The Beagle was an officially sanctioned conversion based on the 8cwt van, carried out by Martin Walter Ltd. of Folkestone, Kent. The Beagle received rear side windows and a fold-down rear seat; leaving 28 inches of luggage space with the seat in use.

This humble van was sold under various names around the world.

It became something of a screen star, being the van used in the TV series, the Beiderbecke Trilogy and enjoyed a part in the Oscar-winning movie, a Fish called Wanda.

The HA van soldiered on until 1983, long outliving the Viva car version on which it was based.