By Ian Johnson on 2017-04-27 - Ian has been a member of Driving Force since its inception. He began his career in journalism in 1962 on the Cheshire Observer and took over the paper's motoring column in 1966. Specialist areas include classic cars, product launches and automotive comment. 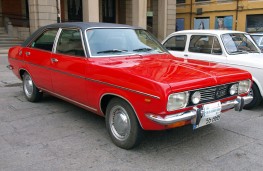 AT the dawn of the 1970s, the car market was agape over the success of the Ford Cortina and the opposition had to find a way of carving a slice of the burgeoning sales in this market sector.

As the coke-bottle styled MkIII Cortina was taking centre stage Chrysler played what it hoped to be an ace - the Chrysler 180.

In those days Chrysler was not allied to Jeep in this country but was a badge slapped on the products which were the sadremains of the old Rootes concern.

Hoping to ride on the success of the Hillman Avenger, the Chrysler 180 was not exactly hot off the blocks.

It was a strange amalgam of styles of American, British plus French origin, because the Simca company was part of the European Chrysler conglomerate.

The manufacturer pinned high hopes on the 180, having the view that it would be the perfect pan-European saloon. A sort of one-size-fits-all sort of car that only finds favour if it is near perfect.

Sadly, in Britain the 180 failed to rock the boat of the saloon fanatic, many of whom proudly rode Ford, Vauxhall or BMC metal.

In character it sat in the disastrous doldrums of the middle ground and nobody could work out whether it was American, British or French.

I drove early versions of this car and although ok in some parts, the whole package was sadly lacking in inspiration. I certainly would not have parted with any money for one when there were much better choices to be had.

It might have been better if it had been given a name - the 180 designation referring to its engine size of 1.8-litres. Only manufacturers like Porsche and Mercedes-Benz could confidently get away with numbers.

There was much spin going on at the time about co-operation between European manufacturers, as was to be seen in the aircraft industry with the resulting Concorde supersonic airliner and the SEPECAT Jaguar multi-role warplane.

However, in the automotive world, the 180 only demonstrated how not to do it. One of the reasons for rather a lot of examples languishing in the showrooms was that it was too expensive at around Â£1,500 - the sort of money that would have bought you a fast Vauxhall VX4/90.

A 2.0-litre automatic followed which gave the car a bit more credibility matching the comfortable American interior with decent performance.

However, the 2.0-litre was still expensive at the same price as a Ford Granada 2500 and more expensive than a Triumph 2000.

In the end, many walked away from the Chrysler dealers wishing the old Hillman Minx would come back.

Cash-strapped Chrysler had to try to to salvage the situation and even mooted a plan for a six-cylinder version or rebadging the 180 as the more exclusive Humber.

This never happened, but the 180 surprised its critics by soldiering on until 1982.

One of the biggest problems was rust which sank its teeth into the metal of the 180 with a ferocity that made you think that the steel or protection procedures werehardly top drawer.

The 180's career in films was not glittering either, its most memorable role being in National Lampoon's European Vacation.

The preservation movement did not take the 180 to heart, which is hardly surprisingand to my knowledge only two are registered with five on SORN.

It all ended up as an object lesson in how to strip what could have been a good car of a positive character by making it a committee effort with a lack of suitable development and funding.