By Ian Johnson on 2017-05-04 - Ian has been a member of Driving Force since its inception. He began his career in journalism in 1962 on the Cheshire Observer and took over the paper's motoring column in 1966. Specialist areas include classic cars, product launches and automotive comment. 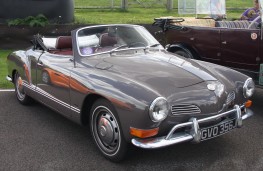 THE VW Beetle was what it claimed to be, a well-built car for the people - a role which it performed admirably in its long career.

But in 1955 someone waved the style stick over the Beetle and the amazing Karmann Ghia was born.

Manufactured in 2 plus 2 coupe form from 1955 to 1974 and convertible from 1957, the Karmann Ghia combined the chassis and mechanicals of the early Beetle with a sports car styling by Luigi Segre of Carrozzeria Ghia and the build quality of German coach builder Karmann.

The later model had more angular bodywork, but the real masterpiece was the early form which had a timeless quality which makes it look good even against much more modern wheels.

Production doubled rapidlyafter its introduction and it became the car most imported into the USA.

With its layout of rear-engine, rear-wheel-drive it was a total stunner and soon acquired the nickname of the poor man's Porsche.

Not exactly true, because if t was pitched against a Porsche it would lose hands down as performance was not the Karmann Ghia's forte.

But it embodied all the features that endeared Britain to the Beetle but was a total smoothie in its approach to everyday motoring.

I remember when they were going for peanuts on the used car market but these days they are a prized modelthanks toa high build quality that helps to ensure longevity.

It is accepted that Ghia's head man Segre masterminded the design, but there is a common belief that all he had done was to scale down a design by the great Virgil Exner of the Chrysler d'Elegance which Ghia had built in limited volume.

I was passed by one recently, this being one of the 684 examples left registered on British roads. Its appearance was as fresh as many more modern designs - a tribute to it creators.