By Edward Stephens on 2017-05-13 - Edward edits the motoring pages of the Birmingham Mail and Birmingham Post as a freelancer after more than 35 years on the staff. Also writes on motoring for various other newspapers, trade magazines and well known websites. 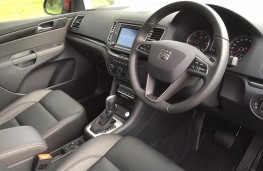 MOTORISTS looking to buy an MPV tend to have two main criteria - looks and flexibility.

And SEAT's trendy new Alhambra scores top marks in both.

The latest Alhambra is a good looking, tall but far from boxy seven-seater which is ideal for a large family or for anyone who needs five seats and plenty of luggage space.

And the nice thing about this model, unlike its predecessor, is that the second and third row of seats fold into the floor in a very simple action giving a completely flat load bay.

With just the third row folded down - the norm for most motorists - the Alhambra offers a generous 650 litres of luggage space.

But with both rows of seats folded it offers the carrying capacity of a good sized van with a massive 2,297 litres of luggage space available.

Previous Alhambra models have had conventional hinged rear doors but the current one now has sliding ones which tends to be more convenient in tight parking spaces.

If you go for the top-of-the-range model these doors and the tailgate are operated electrically at the touch of a button, but on my SE model they were operated manually but with very little effort needed.

Under the bonnet in the SE is Volkswagen's tried and tested 2.0-litre, 150bhp diesel engine with a six-speed manual gearbox which has plenty of pulling power to cope with whatever you are carrying.

With a top speed of 124 miles per hour and a generous 0-62mph acceleration time of 10.2 seconds it's a great little workhorse of an engine which never disappoints.

It can be a little noisy under heavy acceleration but once up to speed noise levels are very low.

At the same time you can expect to get over 50 miles per gallon on average - even if you do a lot of town work. And as SEAT prides itself on being a sporting brand the suspension is on the firm side ensuring an impressively stable ride.

The Alhambra is one of those vehicles that feels comfortable for every occasion. Stadium seating means that as you go from front to back each row of seats is higher than the one before it so all travellers get a good view through the front window ensuring a more pleasant journey.

The Alhambra's height means it's easy to get in and out of and there are plenty of interior spaces for on-board items, including two under-floor compartments beneath the feet of passengers in the middle row of seats.

This car even came with storage compartments integrated into the roof, although that is a £145 optional extra.

Middle row passengers have the luxury of being able to control their own air conditioning and also get aircraft-style fold down trays - fitted to the backs of the two front seats - for on-board picnics.

There's an electric handbrake rather than a manual one but sensibly it's been combined with a hill holder clutch so you don't roll back when pulling away on hills.

SEAT has now opened the order books on its first large SUV and new flagship...