By Robin Roberts on 2017-05-27 - Has had with a career spent covering the automotive industry and particularly its Welsh component suppliers - he can not only tell you what goes where but possibly who made it fit. He has been a motoring journalist based in Wales for three decades.

SOME things in life are worth waiting for.

When we drove the Mazda MX-5 RF back in February at its launch only the 2.0-litre versions were available and remembering how impressed I was by the lasting memory of the original MX-5 with its 1.6-litre engine many years ago I was eager to try the 1.5 entry level model in today's range.

It was worth the wait.

I have always liked the folding fabric roof of the original and subsequent models but the new Retractable Fastback metal lid does "lift" it to a new higher level of desirability.

In seconds the metal roof folds away flat behind the seats or erects on its scissor-like arms at the touch of button and it makes every British summer's day a driving opportunity, although you pay Â£2,000 more over the soft-top equivalent.

The smaller 1.5-litre engine is about 29ps less powerful than the 2.0 stablemate and fractionally slower through the gears with a top speed about 6mph less as well, but the 2.0-litre will give you 36mpg and the 1.5 stretches eight miles more out of a gallon and its cheaper to insure and much cheaper to tax.

To my mind the savings make sense unless you really must have the 2.0-litre for a reason, and in fact I believe the 1.5 to be better car with its handling and ride.

It's still quite quick through that wonderfully creamy gearbox with its light clutch, the steering is pin sharp and well weighted and it stops easily and undramatically from speed.

I liked the compliant ride and the way it soaked up bumps, although you could clearly hear the system working away when the roof was closed but it was not so noticeable when open.

Handling was entirely predictable and safe with a bias towards over steer if you were too enthusiastic with the right foot.

It really has adequate power for two people to enjoy a run through the countryside with enough in reserve to safely overtake and get it on a motorway it will gobble up the miles at a sensible speed without any complaint.

You have to be fairly well organised as the interior oddments room is minimal, while the bootspace is suitable for a bit more than a credit card and thong but you'd struggle with a big hard-shell case and better to use a sports bag.

Mazda has wisely not been tempted to destroy the MX-5 character by making this fourth generation model too big and its agility and ease of parking are also points in its favour.

Now, Mazda anticipates selling 75 per cent of 3,500 MX-5 models in the UK with the RF bodystyle which resembles a coupe when closed so it actually looks quite different to the fabric finished stablemate. 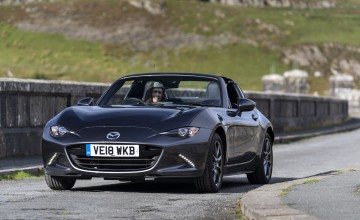 YOU know how it is. You get behind the wheel of a two-seater sports car, lower... 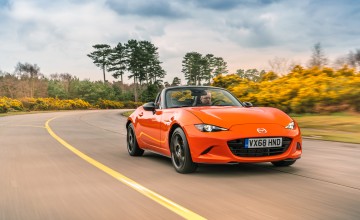