By Mike Torpey on 2017-06-04 - Driving Force news editor and responsible for organising our daily output. He was staff motoring editor of the Liverpool Echo for 20 years.

THERE'S still an understandable touch of the fear factor around when it comes to plug-in hybrid models.

Concerns about charging, range and purchase price have all contributed to some interested parties opting to hang fire until things become a bit more mainstream.

And while cars like the Volvo D5 Twin Engine tend to appeal to a limited number of potential customers, this model in particular doesn't really have a direct competitor.

The official electric range may be 31 miles but no one feels comfortable seeing a single figure mileage distance flagged up before letting the diesel engine take over.

With the pair working in tandem - plus a few heavy manners from the driver - the V60 is capable of accelerating from 0-62mph in 6.7 seconds.

So there's plenty of oomph there when you need it, as well as some handy low down pulling power.

As for fuel economy, well that claimed combined return of 155.2mpg is a bit fanciful given that anything other than short runs will rely on the diesel engine - in our case the average return was 47 miles per gallon.

There are more engaging cars out there to drive than the Twin Engine, but what you can guarantee with the Volvo, any Volvo in fact, is something stylish, understated and comfortable.

Not only does the V60 look elegant but it also carries an air of distinction, from its top notch dynamics and ride - even with the batteries beneath the boot floor - to the quality of its fittings.

And there are certainly plenty of those, every V60 coming with the likes of Sensus Navigation and Sensus Connect, voice control, a seven-inch screen, cruise control and hill start assist.

Based on SE Nav grade, the tested variant comes clad in smart charcoal leather upholstery with brushed and plain alloy inserts around the centre console, door panels and part of the steering wheel.

Rear space is adequate rather than exceptional, at least if there are tall people up front, and there is a transmission tunnel which means the centre rear passenger is required to sit with one leg either side of it.

The actual seating position is comfortable though and there's sufficient shoulder room too.

In a standard V60 you get a half-decent 1,241-litre load space with the seats folded; in the plug-in hybrid Twin Engine it's slightly less at 1,126 litres but useful nonetheless.

Safety, a watchword with Volvo, is a priority with the V60 estate and the standard City Safety set-up claims to reduce insurance claims for front and rear collisions by 28 per cent.

MOST people who buy a new Volvo estate car are out to make a sensible choice,... 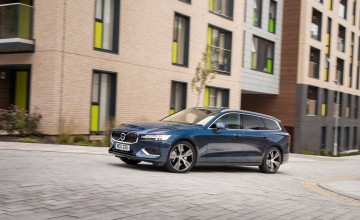 Volvo V60 an alternative to SUVs

YOU could be forgiven for thinking that estate cars had been swept away by a...