Plugged in to a

By Steve Orme on 2017-07-04 - Steve has been on the motoring circuit since 1979 and has a particular interest in 4x4 with access to off-road terrain. Steve writes the weekly Full Chat column which takes an irreverent look at motoring. A member of the Northern group of Motoring Writers.

JUST about everything on earth seems to bring with it a phobia or anxiety complex.

Inevitably the advent of the electric car would bring with it some sort of mental disharmony, faulty wiring to the synapses, fuse-box paranoia.

And here it is - range anxiety, an unshakeable concern for the distance available from electric vehicles without the prospect of flat-lining out on the moors.

My own mental equilibrium is disturbed by the pretty narrow slice of society which can actually make use of them, essentially those with an uncluttered garage and decent wall sockets.

Don't know how you manage to own one in a flat and my access is via a dirt track with rustic parking area still 50 meters from civilisation.

On top of which we are warned that it was almost certainly Samuel Pepys using an extension lead to charge his sedan carriage which started the Great Fire of London.

But here was the second-generation Plug-in Toyota Prius and there, down in the village just by the health centre, were two shiny new charging posts.

At last an end to acoustic car review misery.

You know the way at supermarkets people who last owned a child in 1666 use the mother and toddler spaces willy-nilly? Well that.

Look, morons, Nissan doesn't do an electric Qashqai and just because the charging post is blue, it's not an invitation to those who have a badge to same colour to block the spaces.

No matter, with a petrol engine and even a solar panel, the Prius Plug-in hybrid is a pretty convincing, if costly, option in the brave new world.

Even when the batteries run dry it returns good consumption figures and the burning question is do you really want the extra 30 plug-in miles added to the electric motor's range?

Well it's not going to bore you to death, the 1,800cc engine may only knock out a stroll to 62mph in 11.1 seconds but there is a whole host of distractions to keep the gadget freak occupied while reaching out for a combined consumption of 283mpg and even over 60mpg with no battery power.

Yep you read that right.

Central to the whole attraction is a screen demonstrating the remarkable way the Prius juggles its electric sources, including the roof panel although that will only give a three mile increase in EV range.

My own love is for the silent pull-away: slip the three-setting CVT gearbox into drive and there is not so much as a murmur.

Obviously it is a car for the urban way of life but that low power output is no drawback on the motorway and certainly compensated for smoothness.

Why would you do that?

Forget tax-free motoring, these mean-breasted days you will have to pay £130 a year road tax but company users face BIK of just nine per cent.

Take the corporate thing to its final stop and the Business Edition+ version, £30k with Government incentive, solar roof, parking pack and paint job is a great car for refinement with loads of kit.

The suitably sci-fi without being a nonsense it is clear that every electric feature will be fitted including a wireless phone charger and touch screen centre with sat nav and parking camera among the many treats.

Safety features include a pre-collision system which detects those pesky wandering pedestrians.

As with anything packing a load of batteries the downside is practicality and the boot has a very high floor with limited usefulness.

And for those in peril on the AC/DC the remedy for plug-in palsy is apparently to be found in a cottage industry springing up across Britain whereby electric car drivers can get a boost from domestic plug points for a small charge.

A good idea but I would stick with a hybrid no matter how attractive the idea of giving the looker at Number 27 a jump start. 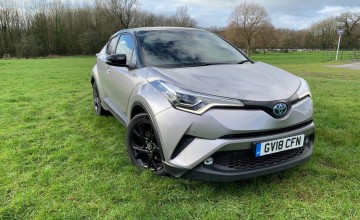 THERE was a time when trying to guess the make and model of the car up ahead...