By Ian Donaldson on 2017-07-17 - Ian estimates he has driven more than 6,000 cars (so far) in a road testing career that's taken him around the world. He has spent several years as a full-time staff motoring editor and is now a busy freelance journalist

IF you've been following the news you might expect any story about a new Volvo to ignore words like petrol and diesel after the shower of recent publicity that the eco-caring company is turning all-electric soon.

Well, you are about to be disappointed. Sorry, but until those totally plug-in days arrive there is life left in fossil fuels - even for Volvo - and now shown to fine effect in the latest offering from the brand.

Englanders, who loved its solid feel, smart but no nonsense interior and the feel ofâ¦ Swedishness in a market saturated by rivals with German badges on the bonnet.

That Scandi vibe continues unabated in the new XC60, with crisp lines outside and a cabin so conspicuously minimalist it only needs a log burner and sauna to complete the feel of a trendy Gothenburg bolt hole.

Priced from £37,205, it joins the Volvo range as a slightly smaller sibling for the notably chunky XC90, already regarded as a thoroughly sensible choice against rivals like the Range Rover Sport and Audi Q7 and a less aggressive looker than either.

This is where things get a bit more complicated and might make some potential XC90 buyers wonder if they couldn't save a bob or two and take this smaller newcomer, which starts at Â£48,655, or Â£11,450 than the least expensive XC60.

The decision might come down to how many times you need to carry more than four passengers with you. Answer ‘lots' and the answer is clear; only the big XC90 has a third row of seats, so no contest.

They require that the XC90 is longer than its smaller companion by a modest 20cms, or 10ins in old money. Both cars feel equally and notably wide on some British roads.

But then consider that the smaller and five seat only XC60 actually has a bit more legroom in the second row seats and the temptation to save some cash becomes more compelling. Yes, the larger car will take more luggage with the third row of seats folded down but you'd never call the XC90's boot mean anyway.

Then there are the looks. Yes, the newer car has slightly different treatment at the front and across the back end, with bolder looking treatments for the lights, and there are some discreetly added contours along the side. But it still looks a lot likeâ¦ a minutely shrunk XC90, and none the worse for that.

Barring a bit of applied trim titivation, the dashboard of both cars is identical. Which means it's businesslike and unobtrusively smart, with a big touchscreen in the middle dominating proceedings. Seats are clones too, making either car as adaptively comfortable as anything on the road today.

Up front, you will find similar engine choices too, with most sales bound to go to diesels, with Volvo's freshly minted all-electric future confined for the moment to an expensive (Â£57,950) hybrid model. This combines a powerful petrol engine and modest battery which gives up to 28 miles of pure electric running and a tiny CO2 rating of 49g/km, which your accountant will love.

Most cars will use a 190 horsepower version of Volvo's 2.0-litre diesel engine (55.4mpg official average and 133g/km) with a more powerful model (235hp, 51.4mpg, 144g/km) as second biggest hitter. This one cleverly adds a tiny air compressor to puff the turbo into life at low revs, sharpening the throttle response in the process.

Power hungry owners will fancy the petrol T5 with its 254hp (39.2mpg, 164g/km) or perhaps the range topper T8 Twin Engine hybrid with its extraordinary and unrealistic 134mpg official potential and nine per BIK rating. Expect lots of owners of their own companies to have one of these on the books.

All use an eight speed automatic gearbox and there is an air suspension alternative to conventional steel springing on some dearer versions.

As ever with a Volvo the XC60 drips with safety kit, this time adding a system that will help you steer out of the path of an oncoming vehicle if you move dangerous out of your own lane. Clever or what?

Every XC60 has all-wheel drive and all of them have enough under the bonnet to feel at least decently brisk, from baseline D4 and its 8.4 seconds time to 62mph through to the 320 horsepower T8 Twin Engine and its stirring 5.3 seconds time helped with both petrol and electric power.

Out on a varied route with lots of town work and a famous Peak District pass road on the menu an entry level XC60 in Momentum trim proved easily capable of holding its own in cut and thrust traffic, its steel springs only rarely complaining on an especially chopped about surface.

A trip readout of 38mpg at journey's end seemed about right, if some way from outstanding.

The same engine in a more plushly kitted Inscription Pro car (£44,905) was similarly hushed and its air suspension rode a little more assuredly, but the difference was slight. Much bigger wheels (20-inches against 18-inches) with their lower profile tyres noticeably sharpened the steering.

Whichever XC60 you steer towards, you will enjoy a car generously equipped with ownership appeal. 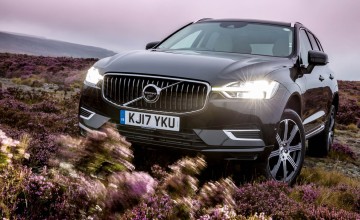 VOLVO'S SUVs are asserting themselves as worthy successors to those classic...