By Steve Orme on 2017-07-25 - Steve has been on the motoring circuit since 1979 and has a particular interest in 4x4 with access to off-road terrain. Steve writes the weekly Full Chat column which takes an irreverent look at motoring. A member of the Northern group of Motoring Writers. 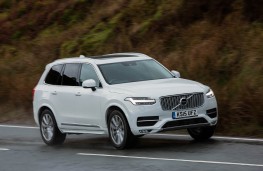 DESPITE the people who tell me it is a mortal sin to be an indigenous middle-class male, being largely just that I wear my hard work with pride.

What is more I am guilty of being a bit older than young and thus, for me, the Great Struggle is over.

Work is on a need to know basis, as in I need to know more than the equivalent of a McSlurry is keeping my ears apart.

I understand things that in my youth would have had me foaming at the mouth.

For instance, I have spent the last 38 years seeing the great European experiment at work and it doesn't.

A lifetime immersed in the countryside's bounty leaves me to believe claims of climate change are so much hot air.

Hardly a surprise, in that case, that I have a thing about Range Rovers, making it most unlikely I would come over all North Islington, all metropolitan.

However I have fallen for the Volvo XC90, allegedly the preserve of the yummy mummy and about as much a part of rural life as a fox crèche.

Now, the twin-engine plug-in hybrid T8 may sound like the golden ticket to the best seat at a Hugh Grant dinner party but it is far more than that.

Obviously before we go into where best to lodge an over and under Berretta shotgun, there is the small matter of how this may well be the safest car on Britain's roads.

It will not let you run anyone over, applies the brakes if driving becomes even marginally erratic and has a surrounding wall of City Safe sensors.

But it is big, bigger than you may expect, evidenced during the need to visit Her Majesty's Whitewell estate.

Bowland roads are pretty narrow and while they invite using the 90's all-wheel-drive (AWD) grip and lack of lean in the bends a lot of road is taken up and, frankly, this is no match for a tractor.

Back on the M6 and the benefits of future autonomy become clear.

It's like a good journey by air but with better leg room.

This is the best interioryou will sit in all year, an indication of what Swedish designers dwell on taking a long, relaxing sauna.

Look at this, a crystal gearshift for the eight-speed automatic gearbox, a massive sunroof with electric shade and those Volvo seats which make furniture at home look like a monastic punishment.

So much comfort and leather to the point where bovine extinction must be a worry but what about the numbers?

Well this Volvo, big as Queenie's latest aircraft barge, has a 316bhp turbocharged and supercharged two-litre petrol engine at the front and an electric 86bhp motor where the prop shaft would be.

As a result it not only does it have the potential to do 134.5mpg, 27 miles on electricity alone but it hits 62mph in 5.6 seconds which by any measure is hardly the stuff of the school run and new knickers from Liberty.

It also has the seven proper seats demanded for family practicality.

Hardly a detail has been forgotten from automatic foot operated tailgate to an iPad style touch screen which houses the navigator, reversing camera and all the electronics.

The only complaint I would have is that unlike, say, the Toyota Prius just what is happening in terms of power source is not easy to define.

The bill, without drinks, for Inscription Pro trim is just under £70,000, ouch, but much less ouch than a Range Rover.

And, of course, if you drive a Range Rover people immediately identify you with immense wealth and assume you have servants which you regularly kill to death.

Whereas a Volvo indicates that your excess disposable may support a nearby social conscience.

But it is still a contender for premium rural life.

The Momentum version kicks off the hybrid range at £61,650, with quality and the reassurance that whatever hard work you have put into life it was worth it while recognising that a bit of electric music does no harm.

In fact, given the chance, I would have driven it onto the Pyramid stage at that there Glasto and let the XC90 make a class-divide speech.

Like, don't buy this car and claim to be one of the many.