By Ian Johnson on 2017-08-17 - Ian has been a member of Driving Force since its inception. He began his career in journalism in 1962 on the Cheshire Observer and took over the paper's motoring column in 1966. Specialist areas include classic cars, product launches and automotive comment. 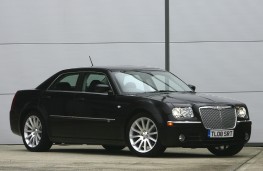 IT is the car that placed pure American thinking on the driveways of Britain.

The Chrysler 300 is a is a rear-wheel-drive front-engined luxury car and when it came to the UK there were many who said it would not sell.

How wrong they were. The look of the car was far from being over the top. It was classic in line and offered some serious power.

From some angles it looked like the old Rover P5 of the 1960s and many British drivers who were looking for something beyond Mercedes-Benz and BMW took it to their hearts.

With a range that included a massive estate in its original form, the 300 the stage for the 2005 model year.

The first cars featured a large in-your-face chip-slicer of a grille, but many British drivers ordered a beautiful silver mesh grille that really refined the appearance of the car.

Many components were derived from the Mercedes-Benz E-Class of 2003 and the whole car was the better for it.

There were some mighty engines on offer with a thumping V8 Hemi on the options list.

The clever 5.7-litre V8 could be run on four cylinders when less power was needed in order to reduce total fuel consumption. In the UK you could expect around 28mpg from this version. But there were V6 petrol and diesel options available too.

A mildly redesigned 300 was introduced in 2011 as a four-door saloon, the five-door estate version having been retired.

There have been a number of attempts to introduce large American cars to the roads of Britain, various Cadillac models being in their number.

But none had the allure of the Chrysler 300.