By Ian Johnson on 2017-08-21 - Ian has been a member of Driving Force since its inception. He began his career in journalism in 1962 on the Cheshire Observer and took over the paper's motoring column in 1966. Specialist areas include classic cars, product launches and automotive comment. 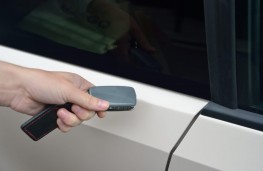 IT was just too good to last - the car thieves are wising up after a period of being frustrated by modern technology.

Gone are the days of the hot wire nasties who could make your car disappear from the driveway in seconds.

Now car criminals are far more likely to be computer savvy than have the ability to hot-wire a car warns vehicle tracing experts Tracker.

One stands near the car being targeted and the other stands near the front door of the owner's home to get in range of the key fob - often left on hallway tables or kitchen worktops.

The device then picks up the key fob signal from inside the house and relays it to the car. Using this method, thieves are then able to drive away in a stolen vehicle in a matter of just a few seconds.

"At Tracker, we are seeing more thefts recorded as ‘stolen without the keys' which suggests that electronic manipulation and cyber compromise are on the increase," said Andy Barrs, the organisation's head of police liaison.

"The new relay attack technique has gained significant ground in the US and Germany, but it's also beginning to take hold in the UK, so vehicle owners need to protect themselves and their assets."

According to German research, which tested vehicles from 30 manufacturers, the brands to particularly be on watch out for are BMW and Peugeot.

However, using a relay device, testers managed to unlock many vehicles and start the engine, with the BMW 7 Series, Ford Focus, Toyota Prius and VW Golf among the most affected models of vehicle.

"These tools are readily available on the internet for as little as £80 and thefts typically occur in residential areas, where cars are parked relatively close to the house, especially at night.

"It's worth remembering that technology is just one part of vehicle security and more vigilance needs to be taken across the board; this includes car owners, manufacturers, dealers, insurers and the police.

"We also urge motorists to remember that whilst a tracking device won't stop a car being stolen, it can significantly increase the chances of the police locating and returning it to its rightful owner."

Unlike other stolen vehicle recovery systems, Tracker technology can locate vehicles anywhere, even when they are hidden in a garage or shipping container.