By Ian Johnson on 2017-08-29 - Ian has been a member of Driving Force since its inception. He began his career in journalism in 1962 on the Cheshire Observer and took over the paper's motoring column in 1966. Specialist areas include classic cars, product launches and automotive comment. 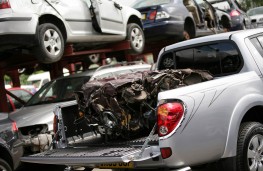 I HAVE always been a scrappage rebel.

At the risk of being branded planet unfriendly I was dismayed as the government sponsored scrappage scheme of some years ago wiped out some of the dearest old cars ever to grace Britain's roads.

I will never forget the day I saw an eminently roadworthy Morris 1000 Traveller being sickeningly gobbled up by a scrapyard crusher.

But this genocide of old bangers came to an end, only to be replaced this year by some manufacturers offering similar schemes for financial incentive.

One of the latest is from Ford which has launched a scheme to enable the most polluting vehicles to be permanently removed from UK roads.

Incentives of up to £7,000 make new, cleaner vehicles more accessible.

Open to owners of any vehicle registered on, or before December31, 2009 (pre-Euro 5 emissions) against selection of latest generation Euro 6 petrol and diesel models, including Transit Custom vans.

Ford claims that replacing the UK's population of old petrol and diesel cars alone could save 15 million tons of CO2 annually2 - and drastically reduce other pollutants.

Unlike incentive schemes introduced by other manufacturers, the Ford scheme includes vans, and actually scraps all the trade-in vehicles.

The Ford scrappage programme will run to the end of the year and is effective for registrations from September 1 to December 31, 2017.

Data from the SMMT shows that there are approximately 19.3 million pre-Euro 5 emission level passenger cars on the UK roads today.

The result will be quite different from the Government scheme in that a lot of more modern cars will be reduced to an ugly cube of metal.

And hot on Ford's heels Hyundai has weighed in with its own scrappage scheme.

Hyundai scrappage offers up to £5,000 off the price of a new model.

Running from September 1, Hyundai's scheme targets older and more polluting vehicles with Euro 1-4 emissions standard, cars which were registered before December 31, 2009. Regardless of make or model, Hyundai will offer owners the opportunity to scrap or trade in their old car for a brand-new Hyundai, with a range of four-figure incentives available across the line-up.

The effectiveness of such schemes is reflected in that fact that Vauxhall's popular Â£2,000 scrappage scheme, that gets you money off most of its range in return for scrapping your old car, has hit the 20,000 customer milestone.

The programme allows customers to turn in their old vehicle in exchange for Â£2,000 towards the cost of a new model from Vauxhall's award-winning range. Drivers can choose from ADAM, Corsa, Meriva, Astra and Mokka X models.

For example, you can get up to £4,400 support towards a brand new Mokka X SUV, including the £2,000 for scrapping your vehicle.

Of course these manufacturers have to be applauded for such eco-friendly generosity but it will still be heart-rending to see so many perfectly useable vehicles ending their days.