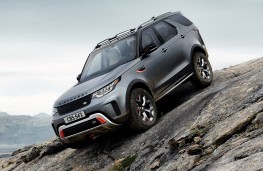 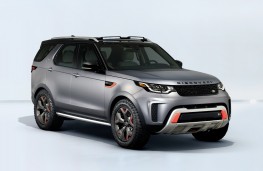 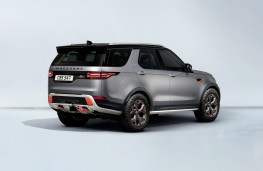 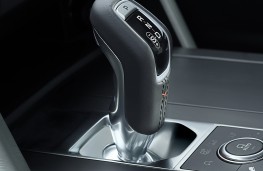 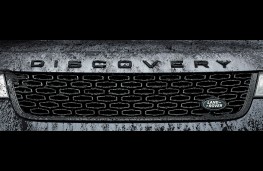 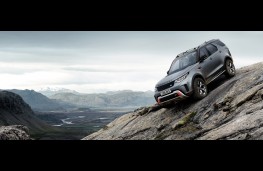 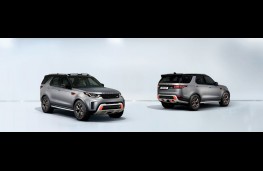 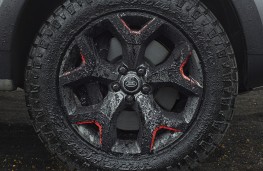 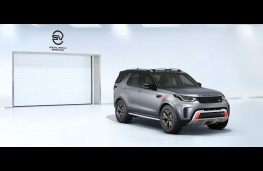 LAND Rover may have set out its stall to include electric vehicles across its range but the latest model to break cover is as hard core as they come.

A mighty 5.0-litre V8 powered version of the all-new Discovery has been revealed at the Frankfurt Motor Show and it is dubbed the ultimate Land Rover.

Created by Jaguar Land Rover's Special Vehicle Operations team based in Coventry, the new Discovery SVX is supercharged to develop 525ps of power with 625Nm of torque - that's twice the pulling power of the 3.0-litre diesel models.

With increased ground clearance, a new articulation set up for the wheels and a remapped Terrain Response system it is said to be capable of tackling the most extreme conditions.

The Discovery SVX is also equipped with active centre and electronic rear locking differentials and incorporates traction control to maximise grip on all surfaces.

Complementing the hardware upgrades are special software calibrations for the eight-speed automatic transmission with its twin-speed transfer box.

The SVX also features a model-first ‘Pistol Shifter' in place of the Discovery's rotary gear selector to offer optimum control in off-road manoeuvres.

Other features include an integrated electronic rear winch and tow hooks - finished off in bright orange - which can withstand loads of up to six tonnes.

On the styling front, the Discovery SVX has new look front and rear bumpers with protective skid plates while the model is finished in an exclusive satin ‘Tectonic Grey' paint finish picked out with orange accents at the extremities.

The side vents are finished in black and include V8 badging while the grille is specially designed for the SVX model. There's also black roof fails and a roof-mounted light pod housing two bright LED spot lamps.

John Edwards, Jaguar Land Rover Special Operations managing director, said: "SVO designers and engineers are embedded within the Land Rover team and have unleashed their own passion for adventure to create another truly desirable and versatile vehicle in the Land Rover line-up."

The Discovery SVX is said to sit alongside the special Discoverys Land Rover has created over the years for the Camel Trophy and G4 Challenge expedition events and is appearing at Frankfurt with other SVO creations such as the Range Rover Sport SVR, Range Rover SVAutobiography Dynamic, the Jaguar F-TYPE SVR and the ultra-high-performance Jaguar XE SV Project 8 - the most powerful road going Jaguar and capable of more than 200mph.

Also on show at Frankfurt is a new 2.0-litre petrol-engined version of the Discovery fitted with Jaguar Land Rover's fuel-efficient 300bhp four-cylinder Ingenium engine rated with emissions of 222g/km which equates to 29.5mpg.

The latest addition to the Discovery range is fitted with a 12.3-inch TFT multi-mode instrument panel and Land Rover's Touch Pro infotainment system with a 10-inch touchscreen interface on the centre console.

Other changes to the Discovery range announced at Frankfurt included enhanced digital connectivity with the introduction of 4G Wi-Fi on SE derivatives and above, providing superior connection speeds for up to eight mobile devices on the move.

Optional second-generation head-up display technology also provides a full-colour display and wider functionality, even projecting 4x4 information and improved navigation displays onto the windscreen ahead of the driver

Cabin air quality is also being improved with the option of an air ionisation system.

Since going on sale in April the new Discovery - which is built at the Land Rover factory in Solihull - has already notched up almost 20,000 sales.

The SVX version will be hand-built at the JLR SVO Technical Centre and although full performance data and pricing is still to be announced it can be expected to be well ahead of £65,000 price tag attached to the current range topper.

Production is due to start next year. 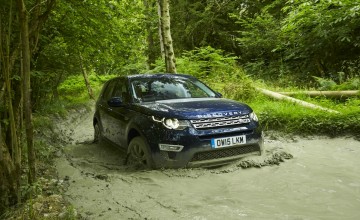 A CONSTANT stream of small to mid-size SUVs have hit the new car scene since...

AS the Land Rover Discovery approaches its 30th birthday it has matured into a...