By Ian Johnson on 2017-09-28 - Ian has been a member of Driving Force since its inception. He began his career in journalism in 1962 on the Cheshire Observer and took over the paper's motoring column in 1966. Specialist areas include classic cars, product launches and automotive comment. 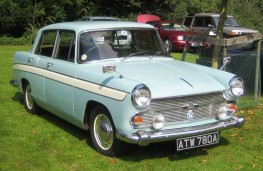 SOME of the most elegant cars in Britain's long history of automotive manufacture were turned out in the 1960s.

And that bastion of conservative design, Austin built one of the best.

In 1961 the BMC Group unveiled the A60 Cambridge, an updated version of the previous Cambridge model, which looked much better.

An important feature was a new 1.6-litre version of the B-Series straight-four engine which was famous for its use in the MGA.

Although by modern standards power was not earth shattering at 61bhp, the car had enough on tap to make driving pleasant and the revitalised Cambridge became a star of the driveways of Middle England and far beyond.

What made this car such a winner was its styling which had the magic touch of Italian stylist Pininfarina.

The so-called Farina range of cars produced by BMC, including Morris, Riley and Wolseley variants were a great change from the American looks that had crept in to marques like Vauxhall.

Reduced size rear fins toned down the Italian flourish but the car was undeniably a good looker.

It was a true five-seater and featured an enormous boot,

An estate version bearing the familiar Countryman name was both practical and very attractive.

There was even a diesel option on offer in 1962 - a hint of things to come.

The Cambridge certainly sold well with 276,534 being built before production finally ended in 1969.

It was originally intended that this car was to be replaced by the rather strange front-wheel-drive Austin 1800 of 1964, but it remained popular and production continued until 1969.

Neither the 1800 nor the later Austin Maxi had the elegance of this model.

It still draws admiring glances and remains a British beauty in the hands of many dedicated restorers who can enjoy its 80mph top speed and maybe a quiet relax as it saunters its way to 60mph in 19 seconds.

In its day, the Cambridge would have cost £883 and stands proud as being a car that was really worth the money.