By Ian Johnson on 2017-10-19 - Ian has been a member of Driving Force since its inception. He began his career in journalism in 1962 on the Cheshire Observer and took over the paper's motoring column in 1966. Specialist areas include classic cars, product launches and automotive comment. 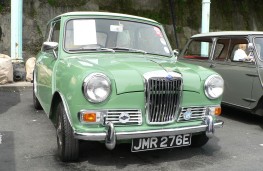 WHEN A friend enquired what was my favourite Mini he seemed surprised at my answer.

Expecting an instant choice of Cooper or Cooper S, eyebrows were raised when I replied the Riley Elf.

The Elf of 1961 is something of a forgotten Mini, but to me it had everything that a small city car should have - luxury and a gutsy engine.

I may have been a bit before my time in expecting luxury from small cars, but the Riley version delivered what was then as far as BMC could go in what is now termed pocket premium.

At the time the company was going at a tremendous gallop in badge engineering basic designs to give the flavour of the different marques it was fielding.

With the Riley in this respect was the Wolseley Hornet version of the Mini but it was always the Riley that had my vote.

BMC has been often, and I think unfairly, criticised for its badge engineering policy, but the fact remains that it turned out some fantastic cars such as the Elf which was the most sporty and expensive Mini.

It could be distinguished by its Riley grille and badging on a modified Mini bodyshell with an elongated nose and front wings to incorporate the upright grille designs.

More importantly the rear of the car was quite different with longer rear wings to give a larger boot and a much more imposing look.

The add-on appearance of the boot soon earned the car the nickname of the Riley Shelf.

Originally power came from a 34bhp, 848cc A-Series engine as found in standard Minis, but in 1963 a MKII arrived which used a 998cc engine to improve performance.

The final version, the MKIII came in 1966 which introduced wind-up windows and fresh air fascia vents.

With a somewhat low top speed of 75mph, the Elf redeemed itself with fuel consumption of 32mpg. In its day it would have cost around £500.

The Elf died well before its time in 1969 when the Riley marque was finally consigned to the history books.

KNOWING which lane to use on a motorway is key to reducing risk and congestion,...

How to beat the ‘cat' burglar

STOLEN vehicle recovery experts, Tracker, is putting the spotlight on a new...