Pride of Peckham up

By Chris Russon on 2017-10-31 - The driving force behind Eurekar. Chris heads up a team of motoring correspondents under the Driving Force banner. Prior to Driving Force becoming independent in 2010 he was Chief Motoring Editor for Trinity Mirror Regional newspapers. Chris has been writing about cars for almost 40 years. 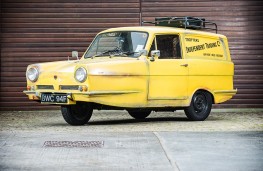 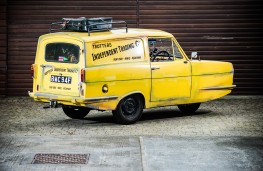 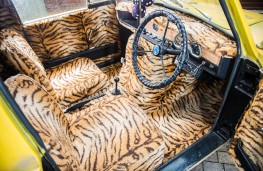 DEL Boy's iconic yellow Reliant Regal three-wheeler from Only Fools and Horses is one of the lots going under the hammer at the Silverstone Auctions two-day classic car sale at the Lancaster Insurance Classic Motor Show at the Birmingham NEC on November 11 and 12.

A star of the legendary BBC series, the 1968 Reliant Regal is one of the most recognisable and loved classic cars of the small screen, transporting Del Boy and Rodney on their many riotous adventures in the smash-hit comedy.

'BWC 94F' was used in the 2002 Christmas Special, ‘If They Could See Us Now', and also featured in the BBC DVD ‘The Story of Only Fools and Horses' as well as in several issues of the fanzine "Hookie Street".

The van appears exactly as it did on screen, complete with tiger print plush interior and ‘Trotters Independent Trading Co' decals. Accessories including a "Tax in Post" window notice, nodding tiger, roof rack with suitcase, set of furry dice, personalised rubber foot mats and a set of blow-up plastic dolls.

With a reconditioned engine, a full synchromesh gearbox, a remote control key start, a DVD player and cassette radio, and even a smoke machine which emits smoke from the exhaust, it will be offered at the auction with ‘No Reserve'.

"Disregarding its TV provenance, it's probably that most reliable example of this 'marque' that you will find and has even participated in the London to Brighton rally in 2001 and 2004," said Nick Whale, managing director of Silverstone Auctions.

With 71,778 miles recorded, the van is supplied with its original owners' handbook, an MOT until 9th June 2018 and letters in the history file from the BBC which confirm its authenticity.