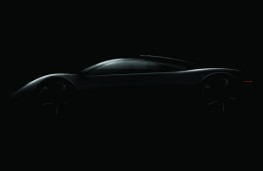 A NEW company set up by a championship winning F1 designer has just released teaser details of its first car for the road.

Alongside an outline picture of what the car might look like, Gordon Murray Automotive revealed that its all-new car under the IGM brand will focus on light weight and driving pleasure.

The company says it will be built for contemporary driving conditions, and will incorporate some of the most advanced aerodynamics yet seen on a road car.

The vehicle's architecture will be based on a new version of Gordon Murray Design's revolutionary iStream system, called iStream superlight, which uses high-strength aluminium sections in place of the steel used in iStream and iStream Carbon.

Its additional weight reduction over the current process delivers a body-in-white structure approaching 50 per cent of the weight of stamped metal, while achieving new levels of rigidity, durability and platform flexibility.

Murray, 71, was the designer of Brabham and McLaren grand prix cars that scored numerous wins for drivers like Nelson Piquet and Ayrton Senna and took several world drivers' championships.

He also designed the now legendary McLaren F1 road car in the 1990s and which now sells for upwards of £11 million.

His new IGM road car will be built at premises at Dunsfold Park in Surrey.