On your bike - for 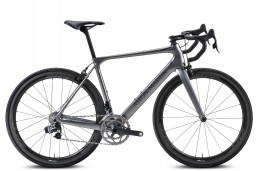 THE least expensive new Aston Martin by miles has just gone on sale for £15,777. Snag is, there are only two wheels and a saddle...

Only 107 examples of the Storck Fascenario.3 Aston Martin Edition bicycle will be built, using a frame of carbon fibre that weighs a mere 770g on a bike tipping the scales modestly at just 5.9kg.

The bike project comes after Markus Storck, founder of the company that makes the machines in his own name, collaborated with Aston Martin on a project to build just seven versions of its Vanquish ultra high performance car.

Storck, who has owned several Aston Martins, joined with the car company's chief creative officer Marek Reichmann to develop the bike, which is finished in a paint called Argentum Nero and which is based on the company's classic racing green finish.

Aerodynamics played an important part in the bike's development, with Storck going to great lengths to smooth the airflow around the front wheels, achieved this through its distinctive open and wide design of fork, which leaves noticeably more room around the front wheel than with conventional designs.

Left and right levers operate just like the paddles found behind the steering wheels on Aston Martin's sports cars - right to go up a ratio and left to go down.