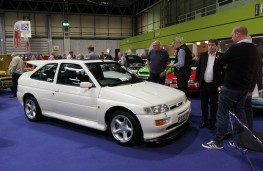 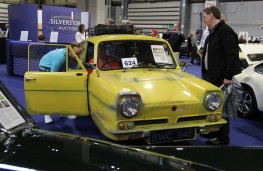 THREE fast Fords dating back to the 1980s have set some record prices at auction going under the hammer for as much as £112,500.

The trio - two Ford Escorts and a Sierra Cosworth - were among the top lots at the Silverstone Auctions sale during the Lancaster Insurance NEC Classic Motor Show.

Top money went on a 1988 Ford Sierra Cosworth RS500 which sold for £112,500 making it the second example this year to break into six figures.

Nick Whale, managing director of Silverstone Auctions, said: "The success of these cars proved once again that exceptional cars sell for exceptional prices.

"These Fords were unique, had fantastic histories and provenance, and really were the finest examples of their respective marques and models. The Mk2 Escort in particular was a simply unrepeatable car - just nothing else like it."

An equally electric atmosphere during the two-day auction at the NEC near Birmingham greeted the sale of the Only Fools and Horses Reliant Regal three-wheeler and enthusiastic bidding pushed the price to £41,625.

Almost overshadowed by the celebrity cars and fast Fords, a pair of classic Mercedes-Benz 190 SLs proved exceptionally popular amongst discerning collectors during the sale, with a 1962 example achieving £118,125, and a similar 1960 roadster selling for £126,000.

A total of £3.6 million changed hands during the auction with 67 per cent of the lots on offer finding new owners.