By Ian Donaldson on 2017-11-14 - Ian estimates he has driven more than 6,000 cars (so far) in a road testing career that's taken him around the world. He has spent several years as a full-time staff motoring editor and is now a busy freelance journalist

BE honest; how much do you enjoy driving? Lots of people couldn't care less... if they're being utterly frank.

The question is worth asking as the world of new cars switches wholesale to SUVs, those off-road pretenders that are making conventional hatchbacks seem increasingly dated.

There are good reasons for wanting an SUV on the drive, of course. Their taller build makes entry and exit easier and there's usually more space for people and things.

You may very likely think an SUV looks better too. Which I suspect is the clincher in lots of decisions.

What they won't do is feel better to drive than a decent hatchback. Added bulk does no favours when a corner arrives and doesn't help on the straights either.

So it was a delight to drop down into the latest Mazda 3 hatchback, made better looking still with modest revisions to grille, rear bumper, door mirrors and with a couple of new colours.

Inside, there are equally modest upgrades with better materials for switch and handle surrounds, leather steering wheel and the old-style manual handbrake is replaced by an electronic parking brake, freeing up space for a couple of cupholders.

More substantial changes are hidden, in the shape of extra sound deadening and better door seals. Upgrades to the suspension are aimed at cutting vibration and improving the ride.

Both diesel engines - 1.5 and 2.2 litres - now have something called transient control which perks up the throttle response. Unchanged is the sole petrol engine on offer, an unfashionably large 2.0-litre with either 120 or 165 horsepower.

Taking the less powerful (and much more popular) of the petrol engines for a spin it's obvious that the Mazda3 has lost none of its appeal to keen drivers, with a deliciously precise gearchange just begging to be used.

And it takes no more than the first corner to discover that a lower slung hatchback has the finesse and sharpness that you simply won't find in an SUV of around the same price.

Mazda makes the point nicely with its CX-3 SUV, using the same engine as the hatchback it consumes more fuel, produces more tailpipe pollution and is slower.

Not by much in any of them, but the biggest difference is in the way the two cars tackle a stretch of poorly surfaced road with corners. The stiffly sprung CX-3 simply lacks the eager puppy feel of its lower-set stablemate.

It also shares Mazda's interior DNA which matches unfussy and clear design for the dashboard with an equally no-nonsense black almost everywhere. You can relieve the gloom with £1,200 worth of light stone leather if you wish. 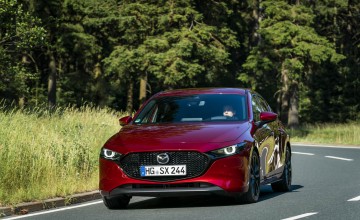 A PHENOMENAL petrol engine has been developed by Mazda that mimics the... 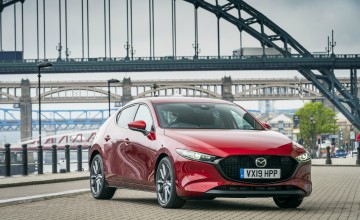