By Ian Johnson on 2017-11-16 - Ian has been a member of Driving Force since its inception. He began his career in journalism in 1962 on the Cheshire Observer and took over the paper's motoring column in 1966. Specialist areas include classic cars, product launches and automotive comment. 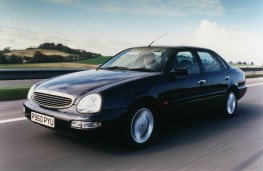 BACK in the 1980s Ford decided to replace its Granada, an executive car that was a true star of the management car park.

The boxy style of the Granada was deemed to be old hat and in came a shape that caused some raised eyebrows.

The new Granada's airsmoothed styling may not have been a broadside salvo to German competitors but it did manage to scoop the Car of the Year Award in 1986.

The trouble was that the car, later to be known as the Scorpio, looked too much like the Cortina replacement Sierra and may have fallen short of the expectations of many discerning customers, despite being the first volume production car with ABS as standard.

In its various forms this model enjoyed a long production run from 1985 to 1998.

It sat on on a stretched version of the Sierra's floorpan and I remember driving one of the first examples feeling that it was just a bit too much like Sierra to be comfortable in its lofty slot of production car motoring.

In typical Ford style the power options included both four and six-cylinder engines. But it was the latter V6 Cologne engine, later in 2.9-litre form that really impressed.

To me, the best of the early Granada/Scorpios was the 4x4 which utilised the V6 power unit.

The Scorpio was very well equipped, with features such as leather heated electrically adjustable seats, air conditioning, electric sunroof and trip computer either standard or available as options.

Ford was very aware that the Scorpio was being viewed in some quarters as an inflated Sierra hatch so in 1990 in swept a saloon which did look more distinctive.

If you wanted a Scorpio V6 in 1991 you would have had to shell out £26,800 which was a tidy sum for the time and which would have started dwindling rapidly as soon as tyre touched tarmac due to the rapid depreciation in cars on this type.

You would have had 140mph on tap and a 0-62mph sprint of 8.8 seconds. However, fuel consumption was an abysmal 22mpg.

The best of the later versions was the Ultima, but Ford's involvement with Jaguar meant that there would be no more large blue badge executive expresses after the death of Scorpio.