By Ian Johnson on 2017-11-23 - Ian has been a member of Driving Force since its inception. He began his career in journalism in 1962 on the Cheshire Observer and took over the paper's motoring column in 1966. Specialist areas include classic cars, product launches and automotive comment. 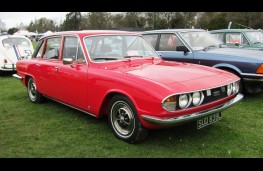 PETROL injection is now commonplace but in the late 1960s it was not without its problems.

One model which was equipped with fuel injection in those times was the Triumph 2500 PI which was a brave move to place the model in pole position for the 1970s and tackle the formidable opposition of the Rover 2000 range.

And there certainly was fierce rivalry between these two makes, both of which regarded themselves as the pride of the Midlands.

Both appeared in 1963 and were aimed at what is now regarded as the executive market.

The difference was that the Triumph had a six-cylinder engine and the Rover a four-cylinder.

The Triumph had the advantage of a smoother power flow and as a new decade approached it wanted to improve on its achievement.

So, in 1968, Triumph bosses stepped on the gas and in drove the 2.5 PI (petrol injection) and it could certainly perform.

At the time Triumph was performing great work with finely tuned twin carburettors but fuel injection took the game into a new league.

But problems soon set in and the PI gained a reputation for unreliability and a prodigious thirst for fuel.

It did not like very hot weather either. In Australia the electric fuel pump commonly overheated causing fuel to vaporise and render the engine inoperable until the pump cooled down.

But the PI soldiered on and was included in the Mk2 range of 1969.

Driving this model was certainly an insight into the potential of fuel injection. I remember it had that punch in the back acceleration that the car deserved.

This marked the end of fuel injected engines for the car, but improved acceleration was claimed for the twin carburettor 2500S.

The 2000 came to the end of the road in 1977 by which time British Leyland was running the show.

Ironically, its logical successor, the SD1 bore the badge of its old rival, Rover which was also under BL control.