By Chris Russon on 2017-12-06 - The driving force behind Eurekar. Chris heads up a team of motoring correspondents under the Driving Force banner. Prior to Driving Force becoming independent in 2010 he was Chief Motoring Editor for Trinity Mirror Regional newspapers. Chris has been writing about cars for almost 40 years. 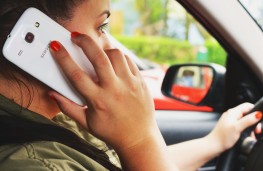 SOCIAL media addicts who can't escape from their gadgets when driving are the new menaces on the road.

Sending text messages, mobile phone use and drink and drug driving have come out on top as the most worrying aspects of modern motoring in a survey of what concerns Britain's drivers the most.

The study by the Institute of Advanced Motorists has revealed that more than 90 per cent of road users consider the dangers caused by people accessing social media or email messages while driving was a significant threat to personal safety and that the problem is increasing.

The study of more than 2,000 motorists in the third annual IAM RoadSmart Safety Culture Survey also revealed that driving while under the influence of alcohol or illegal drugs remained an issue.

And while around half of the drivers surveyed believe the dangers posed by drink-driving have remained the same over time, the problem of people driving under the influence of drugs is increasing, with 64 per cent identifying this as more significant over the past three years.

Other key risks to personal safety on the road identified in the survey included talking on mobile phones (89 per cent), speeding on residential streets (87 per cent), drivers ignoring red lights (87 per cent) and tired drivers (86 per cent).

Aggression behind the wheel was also identified as a problem, with 75 per cent of those surveyed believing this a danger to their personal safety.

Neil Greig, IAM RoadSmart director of policy and research, said: "In the three years we have been running this survey, people's worries about drivers using new smartphone technology have remained consistently high.

"While public awareness of the dangers of using handheld mobile phones is now good, almost 60 per cent of drivers still believe it is acceptable to use a hands free phone despite growing evidence of the distraction this can cause.

"With three years of data there are several other trends emerging which do cause us some concern. Around a quarter of drivers still feel it is acceptable to speed at 5mph over the limit in residential areas and one in in ten believe it is all right to get behind the wheel after taking alcohol and marijuana.

"These figure show we have a long way to go before all the dangers caused by reckless driver behaviour are eradicated from our streets. Road safety activities have suffered from recent public spending cuts but our survey shows that key issues still remain that must be tackled through education, training and publicity."