By Ian Johnson on 2017-12-11 - Ian has been a member of Driving Force since its inception. He began his career in journalism in 1962 on the Cheshire Observer and took over the paper's motoring column in 1966. Specialist areas include classic cars, product launches and automotive comment. 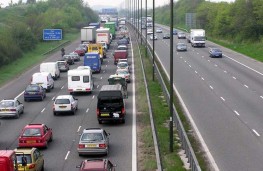 An innovative research project commissioned by Direct Line car insurance reveals that one in nine (11 per cent) vehicles on the road drifts out of their lane, putting themselves and other road users at risk of collision.

Researchers studied more than 70 hours of footage across major UK motorways and found that more than half (53 per cent) of drivers who drift into another lane - an action which could see them prosecuted for careless driving - do so when travelling in the middle lane.

One of the major triggers causing cars to depart their lane is when lorries pass alongside. Drivers reacting to large vehicles overcompensate and drift into the next lane.

When vehicles are travelling in parallel across multiple lanes this drifting causes a domino effect, with cars in the outer lanes forced to also drift out of lane to avoid a collision.

The research further revealed drivers are mostly likely to drift to the right and are more likely to drift when travelling in the afternoon, perhaps as a result of tiredness.

The motorway investigation involved individual lane analysis, recording when vehicles either touched the outside of the lane, or crossed over into another. The findings emphasise the importance of in-car lane departure technology, which uses warning alerts or proactively keeps the car centred, to ensure drivers remain in lane.

More than half (51 per cent) of drivers have experienced another motorist drifting into their lane on a motorway or dual carriageway in the last year.

Half of drivers also reported people drifting into them at junction and roundabouts. A third (33 per cent) of drivers admitted they lack lane discipline and have drifted onto the rumble strips on a motorway or dual carriageway. The lives of cyclists are also being endangered by the one in six (18 per cent) drivers who have drifted into a dedicated cycle lane in the last year alone.

The research reveals the serious implications of drivers failing to maintain lane discipline on UK roads.

Almost 1.5 million drivers reported needing to swerve off the road to avoid an accident because of others' poor lane discipline.

Drifting also causes drivers to take risky evasive action. More than 12 million drivers had to slam on their brakes to avoid an accident because of their lane drifting.

Rob Miles, director of car insurance at Direct Line, said "Failing to stay in your lane, even just for a split second, has the potential to cause a fatal accident when travelling at high speeds on a motorway. If drivers feel tired or are struggling to maintain their focus then they should find a safe place to pull over and take a break.

"This research highlights the benefit of Lane Keep Assist and Lane Departure Warning systems and we would strongly recommend that those in the market for a new car consider a model with this technology. It could be the difference between having an accident or avoiding one."