By Stewart Smith on 2017-12-18 - Stewart was the former motoring editor of the Coventry Telegraph and is now a freelance contributor to Eurekar. He is based in Scotland and specialises in First Drive reviews. 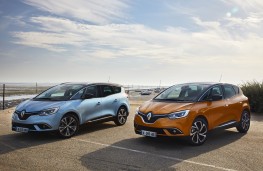 RENAULT has announced UK prices for new direct injection turbocharged petrol engines that will arrive in the latest Scenic and Grand Scenic line-up in 2018.

The French company claim this new engine offers a significant improvement in driving quality with increased torque at low revs and greater and constant availability at high revs, while reducing fuel consumption and CO2emissions.

The new Energy TCe engine will be offered in other Renault models from next year and pricing for the new engine in the Scenic line-up starts from £22,005 on-the-road - a similar price to the current 1.2-litre petrol models.

The Energy TCe 115 - available in manual transmission only - has 220Nm of torque at 1,500rpm and delivers the same fuel economy as the more powerful engine.

Compared to the previous petrol engines it is a reduction in CO2by seven grams on the Scenic and 11 grams on the Grand Scenic.

The new petrol engine is produced at the Renault factory in Valladolid, Spain.

THE battle of the superminis has always been an intense one and perhaps one of...