VW has some fun with

By Ian Donaldson on 2017-12-18 - Ian estimates he has driven more than 6,000 cars (so far) in a road testing career that's taken him around the world. He has spent several years as a full-time staff motoring editor and is now a busy freelance journalist

THE chap from VW didn't say the company's cars might be a bit lacking in flair but - but did admit 'now we've had a bit of fun with this one'.

He was talking about the new and potentially big selling T-Roc, the latest offering from the Volkswagen Group as it blitzes the motoring world with a catch-up-fast line of SUVs.

Audi, Skoda, Seat... they've all done it and this mid-sizer with a VW badge is simply an acknowledgement that everyone wants an SUV these days.

It's a looks thing, mostly, which is why VW has let its corporate design hair down just a bit with the T-Roc, hoping you'll think it looks sharp and stylish on the outside and a breath of fresh air inside, right down to a choice of four colours for the dashboard.

Well, to these eyes, it does just that. But it's a very Germanic idea of having fun with shapes and textures - no wild excesses of a Nissan Juke or Kia Soul sort.

Instead, there's a typically VW quality feel but with a new sense of well controlled freedom.

The T-Roc is a little shorter but wider and taller than the company's best seller, the Golf hatchback (it shares many of that car's mechanicals) and is expected to quickly take its place among VW's most popular models.

There's a smaller, Polo-sized SUV called T-Cross on the way for the end of 2018 but until then the newcomer is the company's smallest attempt at melding off-road looks with hatchback practicality.

Diesels follow early in 2018 but VW expects the vast majority of T-Rocs will go to private buyers - and they overwhelmingly choose petrol power.

There are three familiar trim levels (S, SE and SEL) and a new one - Design, introduced to show what emphasis today's SUV buyers put on... design. Most will have a six-speed manual transmission but an auto box is available with the larger petrol engine, as is the company's 4Motion all-wheel drive system.

An R-Line trim arrives in the spring and you might expect it to have an emphasis on more sporty looks. But it's the Design trim that will rock the T-Roc buyers' boat the most.

That brings a car with a choice of coloured dash top and door panels as well as soft lighting in the front footwells and light strips below the front door trims. You can choose a contrasting roof and door mirror colour and dark tinted rear windows add a touch of style.

The top SEL model (and optional on most others) has a big high resolution screen instead of a set of conventional instruments and it can show your sat nav screen in huge detail. Options include a powered tailgate, electrically opening glass sunroof, leather upholstery and a 400 watt, six speaker BeatsAudio sound system.

Out on the road in a T-Roc with the smallest (1.0 litre) engine and it takes only a few yards to tell you this is a typical Volkswagen - in a good way. That means an easy-going nature thanks to control in the right place and with the right amount of effort needed to work them. That doesn't happen by accident and absorbs billions of Euros in development work.

It's a nippy little thing, with a typically engaging three-cylinder thrum when pushed a bit. There's more than adequate performance, a nicely controlled ride and an impressive 42.3mpg on the dash at journey's end.

All-wheel drive and an auto gearbox on the third car, along with a 2.0 litre petrol engine dragged the economy down to 32.2mpg on the same test route, but the car was smooth and quick.

For most buyers, you have to say thinking small is the way to go. 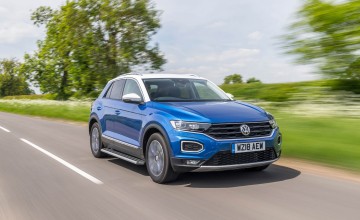