By Chris Russon on 2017-12-19 - The driving force behind Eurekar. Chris heads up a team of motoring correspondents under the Driving Force banner. Prior to Driving Force becoming independent in 2010 he was Chief Motoring Editor for Trinity Mirror Regional newspapers. Chris has been writing about cars for almost 40 years. 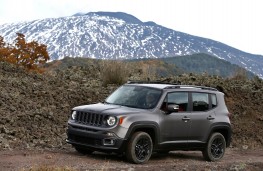 JEEP has released the first image of the new Cherokee SUV which will be revealed early next year at the Detroit motor show in America.

The new model which is due to go on sale later in 2018 has more conservative looks than its predecessor and is similar in style to the latest Compass which Jeep launched in the UK a few months ago.

Smoother lines and flowing headlights are a feature of the new model which retains the classic Jeep seven slot grille.

Performance and technical data are still to be announced but Jeep has indicated it will be using fuel-efficient powertrains in the new 4x4.

In the Compass the emphasis has been on 1.6 and 2.0-litre diesels which are likely to be carried forward on to the new Cherokee when it arrives in Britain.

The car will have its debut at the North American International Auto Show which opens on January 16.