By Ian Johnson on 2017-12-28 - Ian has been a member of Driving Force since its inception. He began his career in journalism in 1962 on the Cheshire Observer and took over the paper's motoring column in 1966. Specialist areas include classic cars, product launches and automotive comment. 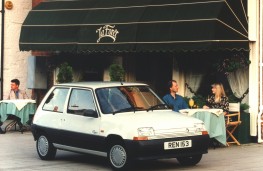 THE early 1970s was a time of iconic designs in the motor industry.

One of the most significant was the Renault 5 which appeared in 1972 and became a familiar sight on UK roads.

Although billed as a direct competitor to the BMC Mini, the 5 upped the ante and was a pioneer of what became known as the slightly larger Supermini genre which later swept through the marketplaces of Europe like a hurricane.

Unlike the Mini with its squat stance, the 5 was more roomy with pure French style and it certainly flaunted it.

Although the Mini was a highly successful and brilliant design, it was just too small for many and the Renaut 5 swept in with a solution.

The 5 had that certain something that assured success and was far more than just a slot in model between the Renault 4 and Renault 6.

It made that vital step between a city car and all-purpose vehicle and had the benefit of a hatchback, so fueling a further trend. There was even a four-door for added convenience.

And all of this was crammed into a length of just over 11 feet.

British buyers could initially choose between an 845cc or 956cc engine, both being married to four-speed manual gearboxes.

The smaller engine could attain 74mph and economy was modest at 31-40mpg.

The 5 drew heavily on existing components for its structure but the looks were very new. It was also one of the first cars to do without a conventional bumper. It had a protective tough plastic shield protecting the full width of the car front and rear and for about 8 inches under the chassis pan.

I remember driving one of the first to come to Britain and immediately surmised that having the front-wheel-drive arrangement with the engine set longitudinally, rather than transverse like the Mini may not have been such a good idea.

The problem was that the resulting bulge into the passenger compartment compromised the layout of the pedals.

Even so, the 5 was a winner. However, rust, scrappage and the like drove this little hero to the point of oblivion. So, if you want to see one stay on the alert as their numbers are dwindling.

AIR pollution from cars could increase with a growing number of parents saying...