By Ian Johnson on 2018-01-04 - Ian has been a member of Driving Force since its inception. He began his career in journalism in 1962 on the Cheshire Observer and took over the paper's motoring column in 1966. Specialist areas include classic cars, product launches and automotive comment. 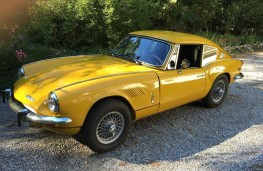 IN 1966 British car maker Triumph had a flash of inspiration.

It had already introduced the little Spitfire sports car, a competitor for the MG Midget and Austin Healey Sprite which went down wonderfully with the buyers of Triumph cars who were, more often than not people who were driven by performance.

The follow up was a sensation - a six-cylinder car with a GT styling.

Called the GT6, it immediately turned heads and its production run continued until 1973.

Hardly surprising that Giovanni Michelotti was commissioned by Standard-Triumph to design a GT version of the Spitfire.

However, the extra weight of the GT bodyshell resulted in poor performance from the Spitfire's 1,147cc engine and things were not looking too rosy.

So a lot of head scratching was done and the four-cylinder was replaced with the more powerful six-cylinder engine from the Triumph Vitesse saloon and convertible which shared a similar chassis with the Spitfire and Triumph Herald. It was a no-brainer really.

The car was further developed and refined and eventually launched as the Triumph GT6.

The new body was a sleek fastback design with an opening rear hatch. It was rather insultingly called the Poor man's E-Type.

The new engine provided a 106 mph top speed and 0-60mph in 12 seconds which gave the MGB GT something to think about.

The tricky bit was the rear suspension which embodied the swing-axle system from the Spitfire, which had all the bad habits and circus tricks of the Herald and Vitesse.

I know because I used to drive a Vitesse and it was perfectly possible to get a rear wheel to lift when cornering hard.

Triumph had done nothing to improve the system for the GT6 and the tendency to break away if the driver lifted off the power mid-corner was not helped at all by the increased weight at the front of the car.

A solution came with the 1969 model year, with the introduction of the GT6 Mk II, known in the States as the GT6+. The rear suspension was significantly re-engineered using reversed lower wishbones and Rotoflex driveshaft couplings, taming the handling and turning the Triumph into an MGB beater.

Overdrive - something you never hear of these days - an electronic extra gear, was a popular option.

The final major facelift for the GT6 came in 1970 in the form of the Mk III. This time the entire bodyshell was revised to match the changes made to the Spitfire.